The Thing about Vampires 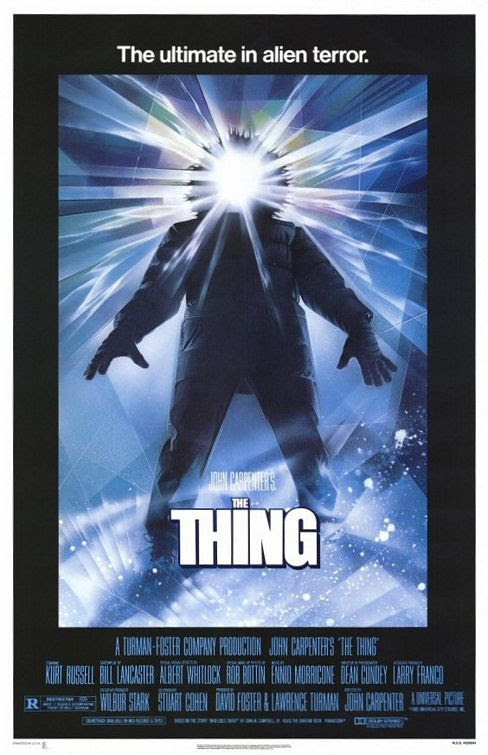 Teaching is all about planning + improvisation. You have to plan well and provide a structure, but it's also important to roll with the vagaries of the unexpected. Today was a case for this kind of flexibility. After talking about the ambiguity that signaled the 1980s shift in horror films, we were all primed to see John Carpenter's 1982 movie The Thing. It's a heady mix of gender politics and claustrophobic masculinity and rather good monster effects for its time.

However, the disc refused to play in the dvd player or in the computer. We even tried one of the students' laptops. No go. Argh. So much for my carefully orchestrated preamble. Fortunately, I do bring a handful of other films to show brief clips from to illustrate various points (we had already watched the opening minutes of the stylish vamp classic The Hunger with Bauhaus, Deneuve, Bowie and Ann Magnuson). The students suggested watching that film instead (in part because of our now running joke about David Bowie) but it's a video transfer and stutters a lot, so I decided to go with Near Dark, which is an entertaining film with some interesting developments, but not quite on track with our trajectory.

I suppose it's just as well as we were giving short shrift to vamps over all (on the whole I'm not a big fan of vampire films) but it irks, of course. But that's the teaching life. We had a good discussion and they'll surely have more to post on-line tonight, so I ought to be sanguine.
Posted by C. Margery Kempe at 15:51

Perhaps it's my last vestige of reverence for John W. Campbell, but I like THE HUNGER and NEAR DARK both better than THE THING, either film, which I've felt dumb down "Who Goes There?"--but it would be hard to pretend that that both versions of THE THING (or, for that matter, either of the vampire films) haven't been enormously influential on subsequent horror (and borderline horror/sf) films--NEAR DARK to such an extent that it seems familiar these days even to those who haven't seen it.

But at least A- minus for the lemonade!

Synchronicity - I wrote about vampires today too, in my blog about soap operas. I was writing about Michael Easton, who played a beautiful vampire in the defunct soap opera Port Charles.

Julie -- this is what happens when you start reading people's blogs. We all start to share a hive mind!

I don't think I can explain the David Bowie thing adequately because it was one of those "you had to be there" moments that came from joking about Claire Higgins' hair in Hellraiser and then just having a bunch of tangential references to Bowie.

Todd -- I am inordinately fond of The Hunger. If I had a proper DVD of it, I might have chosen it, but I'm still working with a bad vid-2-DVD transfer. I think Near Dark would have worked better in a different context. The Thing was the perfect next step in our focus on gender and othering (what happens when there isn't another gender to other?) and so the substitution didn't hit the right mark -- although there's a lot of interesting things in Bigelow's film, including her innovations on vamp lore.

And we did a close reading of Paxton's very interesting attack on the long-haired guy in the redneck bar where I didn't even have to prompt them much to get them to identify a homoerotic subtext.

But now I'm dithering between Pan's Labyrinth ("Is that the one with David Bowie?" one student asked, aghast) and Devil's Backbone, while still keeping the possibility of Frostbitten...

Pan's Labyrinth was not only scary, but emotionally devastating. Did you see The Orphanage?

(I'm getting a strange deja-vu feeling about asking you if you've seen The Orphanage; apologies if this is a repeat)

PAN, definitely, sayeth the bore. (Or at least the guy who's work email has crashed again. Foxbrick@yahoo.com....)

I guess I'm dithering mostly because there is one student who has seen it and I'm a little too enamoured of the idea of presenting novel experiences for them. And I love the idea of offering them another ghost story before the end. Not enough good ghost stories...

I don't know what year The Thing and The Creature From the Black Lagoon were made, but both movies have stuck in my mind as part of my childhood terrors. I'll have to look them up and see how old I was when they came out.

I'm so enjoying your posts about teaching your class. Keep'em coming!

I am thoroughly enjoying reading about your teaching escapades. I envy your students. They are lucky to have you.
Karen
http://www.karenfollowingthewhispers.blogspot.com

I conduct training so I can understand your frustration with things not working out according to your plan. But your plan B worked well, that's great.

Thanks for the kind words of support, everyone. Teaching is exhausting work but usually rewarding, though technical frustrations can take a toll on your enthusiasm. My first real epiphany about teaching (in my first semester) came when I was rushing from a much longer visit than expected time at the Connecticut DMV. I didn't have time for my usual over-preparation and instead had to come up with an assignment for the students where they carried the burden of discovery.

Of course, it was the best class I had had up to that point and I was at least perceptive enough to say, "hey, maybe I'm doing this wrong..."

Oh, but of course! When does it ever go smoothly? I enjoy hearing about your teaching escapades... I'm thinking that may be an avenue I take someday. Keep 'em coming!