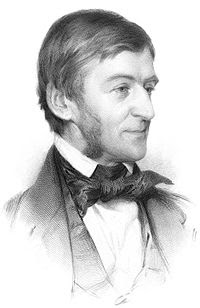 "There is a time in every man's education when he arrives at the conviction that envy is ignorance; that imitation is suicide; that he must take himself for better, for worse, as his portion; that though the wide universe is full of good, no kernel of nourishing corn can come to him but through his toil bestowed on that plot of ground which is given to him to till. The power which resides in him is new in nature, and none but he knows what that is which he can do, nor does he know until he has tried. Not for nothing one face, one character, one fact, makes much impression on him, and another none. This sculpture in the memory is not without preestablished harmony. The eye was placed where one ray should fall, that it might testify of that particular ray. We but half express ourselves, and are ashamed of that divine idea which each of us represents. It may be safely trusted as proportionate and of good issues, so it be faithfully imparted, but God will not have his work made manifest by cowards. A man is relieved and gay when he has put his heart into his work and done his best; but what he has said or done otherwise, shall give him no peace. It is a deliverance which does not deliver. In the attempt his genius deserts him; no muse befriends; no invention, no hope..."

What a totally awesome quote. Thanks for sharing it.

Thanks for the pointer to this essay. Since I don't have time to read it right now, I've bookmarked it in my "Stuff to Read" folder.

I've always been interested in Emerson (and his relationship with Thoreau.) Thanks for sharing "Self Reliance."

Thanks, everyone. Emerson can be tough going, but he is very clear-headed about confidence in yourself that isn't egoistic, just common sense. No one knows exactly what you do, no one can tell the same stories you can. It's worth remembering.

I've always been rather partial to his occult relationship with vegetables.