A Taste of Unikirja: Vipunen

In order to give people a little sample of my collection, Unikirja, today I want to offer one of the stories that previously appeared in print. "Vipunen" is based -- oh, so loosely -- on Runo 17 of the Kalevala. That runo has been interpreted in various ways, including musically by Estonian composer Veljo Tormis. My version is a comic one; a hiker falls into the mythic realm (i.e. into Vipunen's belly with Väinämöinen, the ancient rune singer) and is unprepared to deal with what transpires: 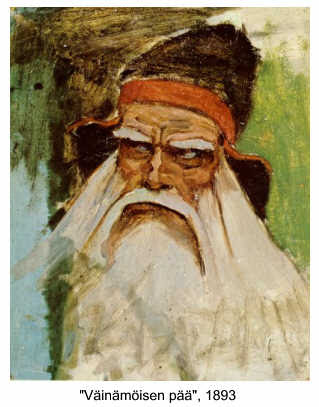 "Well, quite a way to meet!" the old man said warmly, as if for the first time, but I could only glare at him. How long had we been down here? How long had I been down here — he could have been here for centuries for all I knew. It felt like days but looking at my watch — if the time was still right — who knew with all these strange things going on; it appeared as if it were only half past four. But was that day or night? And why did that pool smell like something gangrenous had recently choked out its life in the black waters?

In the cavern my exhalation of disgust and annoyance echoed on for long after I had shut my mouth, the quiet susurrations crawling away from me like escaping mice. It was a very creepy moment. I looked over at the old man who seemed, at first, to have nodded off. I studied his clothes. They were not from this decade. To be charitable, they were not from this century, unless he was one of those re-enactor types or perhaps a folk-dancer. Well, that seemed more likely an explanation for the red skull cap, the wooly tunic and the cross-tied leggings. Was he actually wearing birch bark shoes?! Heavens! Well, that would have to be folk dancing. I don't think anyone's re-enacting the Kalevala, unless the folk movement here in Finland has taken a new and horrifying turn... [read more]
Posted by C. Margery Kempe at 09:05

It's wonderful writing, it really is. I enjoyed my "taste." :) This is a subject I know nothing about and I'm finding my education delightful.
Elizabeth
http://www.mysterywritingismurder.blogspot.com/

Yes, it is delightful, as Elizabeth said. I'm a folk dancer, so I found this excerpt especially interesting. I don't know that we do any Finnish folk dances, come to think of it. Do they "Hambo" in Finland?
Love your writing, K.T. Makes me want to read more.

The painting is very intriguing. The man looks to be angry, wary or discontent? He seems to have a lifetime of stories behind him.

Excellent. I love the writing style and the story itself.

Thank you so much for sharing!