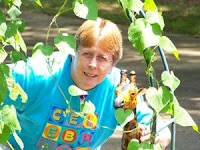 Okay, Birdie's is actually the 29th, but there isn't one this year! Have a great time, gals, wherever you may go. May everything go your way today.
Posted by C. Margery Kempe at 10:00 1 comment:

Get Your Zombie On!

The fabulous Elena Steier illustrates a wild zombie adventure written by Andrew Steier (hmmmm, wonder if they're related?).
Posted by C. Margery Kempe at 12:18 No comments:


And everywhere gnomes drinking their wine raise a glass to the gardener.
Posted by C. Margery Kempe at 09:09 No comments:

On Not Watching the Oscars

I thought of a lot of blah blah blah I could write, but the truth is actually quite simple. The Oscars have nothing to say to me because the mainstream Hollywood industry has nothing to say to me. I'm a woman over forty: where are my peers? Apart from Meryl Streep, whose consistently stellar abilities are taken for granted while people go into paroxysms of praise for male actors who take on any kind of variety in roles, older women have mostly been turning to television because film-makers are allergic to wrinkles on female bodies. In men, it's character -- of course (they're so distinguished). Hollywood prefers women skinny, young and stupid.

I'll vote with my feet.

Will it matter? Nah. They'll still get their coveted demographic of 18-25 males -- who will assume that that's what women are like (and presumably trust that all women go off on some kind of Logan's Run death trip after 30). Hey, there was a young man on one internet list I was on today arguing that women went into prostitution because they "liked sex". It's all about the 'pimps and 'hos', you know.

P.S. I tried to find an article on Older Women in Film I had read before at the Guardian and it came up blank. Fitting, eh?
Posted by C. Margery Kempe at 20:03 No comments:

Yes, blame me, mea culpa, etc. I have been overly neglectful of the blog this past week, but I think after nearly five years I've earned a little slack cutting. I hope!

I promise to do better this week as I countdown the hours to spring break (begins when I finish teaching Mar 4) and a number of deadlines (mostly Mar 1). Yes, I have been inordinately busy this month, but I'll be back to normal and ranting about various things, writing reviews, announcing publications (I hope) etc.

Short version: Dollhouse is a waste of time, Midnight Meat Train, disappointing (and Clive looks and sounds shockingly horrible). I did not watch the Oscars, so have nothing to say about them, though I do plan to say something about why that is -- but right now, I have to run.
Posted by C. Margery Kempe at 13:16 2 comments:

UPDATE: Some great photos of the event including a very nice one of the lovely Eleanor Bron. Thanks for the link, Sally!
Posted by C. Margery Kempe at 15:53 3 comments:

Publication: Review of Deleuze and Horror

I have a new publication out that will interest many of you: a review of Deleuze and Horror by Anna Powell. It's in the latest edition of the Journal of the Fantastic in the Arts (19.1), pages 119-122. Unfortunately, the "current issue" listed on their website is not the actual current one, so there's no preview of the rest of the contents. You will find essays on King, Tepper, 2001: A Space Odyssey, Texas Chainsaw Massacre and Lord of the Rings, as well as a wide selection of reviews. Editor Brian Attebery writes about his inability to overcome his dislike of horror in the introduction to this volume that features that genre. To each his own, though I bristle at the conservative view of horror as only telling "half the story" (he invokes the trilogy of Clute, Fry and Campbell to support that prejudice authoritatively). Some of us need happy endings -- and some of know the world is a dangerous and wonderful place.
Posted by C. Margery Kempe at 12:40 3 comments:

In slow increments of about 500 words at a time, my serial novel The Mangrove Legacy, has passed over the 70,000 word threshold. My, my. Break a task into tiny steps and it gets done (eventually, but fairly effortlessly).
Posted by C. Margery Kempe at 15:10 4 comments:

Comic Relief is a big deal in Britain -- all sorts of people take part in Red Nose Day and the best comedians get together to put on silly skits and, best of all, it raises oodles of money for charity. Some Americans (like John Hodgman and Jonathan Coulton) are getting together to get the tradition rolling here. Check out Red Nose Net and become part of the fun! Donate, follow them on Twitter, join in and help.

Red Nose Day will run from noon Friday March 13 to noon Saturday March 14. Send news about your participation to web master @ red nose net dot com. Have fun -- do good! Comedy + charity: what could be better?
Posted by C. Margery Kempe at 09:15 No comments:


And Happy Anniversary, Gene and Jane! Hope everyone has a wonderful weekend!
Posted by C. Margery Kempe at 08:57 No comments:

Just got tickets today for a version of Godot with some heavy hitters at The Roundabout Theatre's Studio 54:

Should be fun! I love this play and that's quite a slate of actors to include. I recall one of my few great MLA memories being when I saw Irwin perform Stories and Texts for Nothing. Looking forward to this performance, for sure.
Posted by C. Margery Kempe at 11:24 No comments:

Run over to the BBC site and see for yourself a very fun animated film, This Way Up. It follows the adventures of two morticians as they attempt to do their job. It puts the "fun" back in funeral!
Posted by C. Margery Kempe at 09:52 No comments: 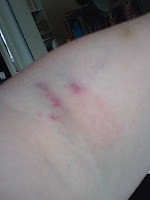 The photo doesn't show it well enough, but there's the result of yesterday's attempt to do a very common thing: give a blood sample. It's been a normal part of life since I was a teenager. Phlebotomists vary greatly, but I've never had one as bad as this. Altogether, four needles of various sizes poked into my arm (the fourth by a different person over at Quest Labs, fortunately). The third one was the worst. She wasn't quite willing to give up immediately and poked around trying to find a vein.

I have big veins, very easy to see and feel. Yet she missed it. Three times. It's the poking around that gave me the swelling and the extra bruising. I had the heating pad on it yesterday, but maybe I'll put a cool pack on it to bring down the swelling.

The best phlebotomist I ever had was in Los Angeles. I can't remember his name because in my head he was always "Hatchet Man." He was nigh on painless every time, straight to the vein and done. But he had this horrific scar and dent in his forehead that looked like someone had buried a hatchet in his head. I was always too timid to ask about it, but it fascinated me. Maybe I should have asked, but it seemed rude. Whatever it was must have been terrible. Probably better I didn't ask. 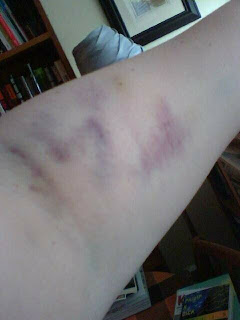 Jump on over to Up Against the Wall for my review of Steve Martin's Born Standing Up: you will find it interesting, I'm sure (or not, who can tell about these things?).
Posted by C. Margery Kempe at 23:15 No comments:

Email ThisBlogThis!Share to TwitterShare to FacebookShare to Pinterest
Labels: comedy, humor, reviews, Up Against the Wall

My short story "Palakainen," from the forthcoming (very soon!) collection Unikirja, has been reprinted in the latest Mythic Passages. I LOVE the image Brenda put with it! Amazing and perfectly apt. This story is based on the murder ballad from The Kanteletar, so it's a touch gruesome -- be prepared.
Posted by C. Margery Kempe at 09:41 3 comments:

How Can I Resist?

Just heard today about a special production of Peter Pan in Kensington Gardens this summer. Irresistible, of course. If all goes well (still waiting to hear on the Northampton conference) I should be able to be there to see it (assuming I can get tickets, I suppose). Well, that's a lot of ifs, but I will clap my hands and see what happens.
Posted by C. Margery Kempe at 21:10 No comments: