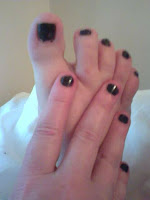 Despite the tight schedule I have this month, I decided to take the opportunity to run down to Connecticut and see my pals before I take off for Britain for a month on June 1. I headed out with the sun shining and the windows down while I blasted music through the lovely Berkshires. First stop was the Punk Rock Jukebox, where I proceeded to annoy Marko while he was trying to do his show. The Queen showed up to help me -- we achieved a new record time for raising the pulsating vein on his temple! Thanks for the Death CD, Marko!

Afterward we ran off to the pub to try Marko's new drink suggestion, the Green Tea Breeze. Very tasty! We were joined by Johnny 10X after he got off work, and then it was time to head over to Miss Wendy's where I was going to be staying. I refueled with some Earl Grey and then we headed to the Aloha Alcohula* where we proceeded to have Stoli-Bollis, a very dangerous thing to do. Not least of which because it led to a sudden decision to lacquer every one's nails with black polish (N.B. Friday had been intended to be a girls night, but the boys crashed it), so Marko and I ran to the store (me without shoes, so I had to stay in the car anyway) to get the polish. He got the once-over from the check-out guy, but he was undeterred in his mission: brave man.

So we painted fingers and toes and giggled like a bunch of teenagers. It was fun. Yes, that's my feet and hands above. Polish since removed.

After such lethal cocktails Wendy and I knew it would be wise to take a cab home, which is when we discovered that this was a seemingly impossible thing to do in Willimantic. Really? Really?! So, thank you Ken for coming to the rescue.

Saturday we woke up bleary eyed and settled for watching a very bad SciFi channel film (is there any other kind?) Kaw, about ravens on the rampage (yes, really -- it had Mennonites, too!), then headed out to Elena's to meet her new puppy Maya -- and play with the other pups, Shaq and Bodie. Eventually we wandered into West Hartford Center and after several misfires (everything was closed for good or for lunch or for renovation) had some lunch, then went over to the Cheesecake Factory to have dessert, but the wait was too long, so we went to the B&N instead, which oddly enough had Cheesecake Factory cheesecake in their café, so all was well.

Wendy and I relaxed Saturday night with the Three and Four Musketeers (Ollie, Ollie!). Sunday was breakfast at Nita's with the Boojums, where we got to hear about The joey Zone's birthday jaunt to Worcester and natter on about this and that. Then it was back to Miss Wendy's, where she had time to introduce me to a new anime series, Mushi-shi, before I headed back out on the road to NY.

A good trip! Thanks, everybody, for a great time!

Sounds like you had a great time and a nice break after a busy couple of weeks! Happy Memorial Day..

Loved reading about your fun weekend.

We did break the Marko Vein-Raising record - less than 7 seconds!

And 'Kaw' was insanely bad- I can't believe I was watching it when you & Miss Wendy were....so bad.

It was lovely to se you, sweetie darling!

Thanks, Elizabeth and Karen! I have to catch up on my blog reading today So much I have missed.

Queen, we should be proud of ourselves, eh? But if you push him to far, he might just pop that vein open, so we ought to be judicious in our provoking. As always, you were a gracious and open-handed hostess. Thank you!

Sounds like a fun trip! I need to make time for more of these... And for more black nail polish :)

What!? You took the nail polish off? I go to work with black nail polish all the time...but they're used to my weird self now. After 9 years there, they should be.

Hee hee -- yes, they did not escape. Marko did my nails. I took the polish off because Wendy has polish remover and I don't. I didn't so much care about having the polish as the always annoying part of taking it off. Then again, maybe shipped black nail polish is the image I should want to cultivate ;-)

Fun post. Enjoy Britian. I lived in London and Swindon - think it's a fabulous country.

I love it! I first lived there for a semester after freshman year of college, then visits in between to friends and another semester as a grad assistant. I've been taking student groups the last few years, so it's great to be able to go without the students and have enough leisure time (well, between the two conferences) to relax.

LOL, your fingers and toes look very cute. Hmm, worth to write a story about them.

Mennonites and Ravens. All the makings of a great Grade B flick.