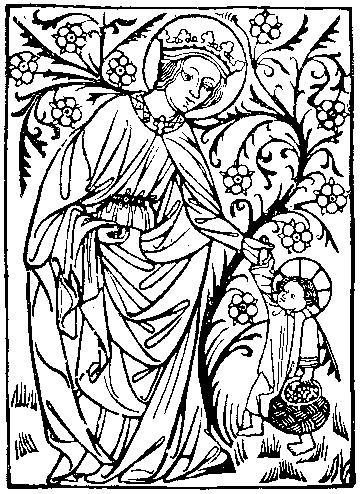 Yes, the third prong of my branding identity, such as it is, has to be me the medievalist. I realise that all of my many attempts at branding only make it clearer that I have weird and esoteric tastes that resist any attempt to brand me for a potential audience. At least "medieval" is surely a more recognizable quantity than "Finnish mythology" I suppose. I do write about popular culture appropriations of the medieval, too, which helps connect this very challenging academic field into the realm of "normal" people (i.e. those who don't find it necessary to study half a dozen or so [okay, ten] dead languages -- although I do find it helpful to intimidate other scholars by listing all of them ;-).

Before I became a medievalist, I thought the same things about the period that most people do: it's all damsels in pointy hats, knights miladying and a lot of plague. Of course, most of what I thought I knew about the Middle Ages was wrong. I wouldn't have discovered that but for taking Stephen Mitchell's class at Harvard where I read Beowulf and Njál's Saga and discovered Anglo-Saxon and Old Norse literature and culture.

It changed everything! I was in love with the languages and had to read more, more, more -- and then I found myself in a PhD program in Medieval Studies and on my way to being an academic.

But it's a hard sell: folks seldom know much of anything about Old Norse and not that much about Anglo-Saxon, apart from Beowulf (and seldom much accurate about that terrific monster story). There's so much fun stuff! Last night at the medieval reading group that the friendly folks at Siena College invited me along for, we were reading riddles. Here's one to give you a taste of this puzzle poetry.

I was an orphan before I was born--
Cast without breath by both parents
Into a world of brittle death, I found
The comfort of kin in a mother not mine.
She wrapped and robed my subtle skin,
Brooding warm in her guardian gown,
Cherished a changeling as if close kin
In a nest of strange siblings. This
Mother-care quickened my spirit, my natural
Fate to feed, fatten and grow great,
Gorged on love. Bating a fledgeling
Brood, I cast off mother-kin, lifting
Windward wings for the wide road.

Do you know the solution?
Posted by C. Margery Kempe at 09:11

Well, of course, I don't know the solution, are you kidding? I can barely remember where I put my glasses five minutes ago, much less figure out complex...uh, stuff. I should--in honor of my age and imbecility--get a free pass on this one. But, you're sweet to ask all the same.

By the way, this was a great line.."it's all damsels in pointy hats, knights miladying and a lot of plague." Very funny.

So, is all this branding as painful as tattoos?

Queen, branding is every bit as painful but leaves no visible scars.

Galen, heh heh! I'll give hints if no one gets it soon. Glad you liked the pointy hats bit. I really did think that, so I have some sympathy for my students' false impressions.

LOL, branding and tattooing, that's an interesting comparison. I guess you're right, we are trying to stamp a product with a remarkable vision.

Enid, you are right. We're trying to create indelible links (as opposed to indelible inks) and keep ourselves in people's minds. Who knows if it will work...

It took me quite a while to understand branding wasn't what teenagers were inflicting upon themselves. That kind of branding does leave serious scars.

Hi Kate, love the riddle, is the answer "cuckoo" as in the bird?

ps loved the movie too!

Lou! Head of the class, gold star! You are correct.

Yes, a lovely film. I'm sorry I missed the last movie night, but things have been hectic around here as I get ready for the trip to Britain. I'm sad to be missing mid-Summer at Claudia's.