Curse of the Demon 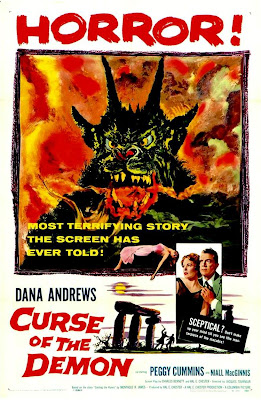 Day two of the horror class consisted of a full-on run through the 40s and 50s. While I talked about a lot of things, I concentrated on showing two films -- not something I plan to do everyday, but as I was giving short shrift to the time period anyway, it only seemed fair. For me, this meant Val Lewton and his protégé, Jacques Tourneur.

First up was Cat People, the Lewton-produced/Tourneur-directed classic starring Simone Simon as a Serbian woman haunted by her people's past. Because we start out with a reading focusing on the psychological development of "the Other" it's a good one. Well, it's a good film anyway, with Lewton's classic eye for light and shadow. At the center of it Simon's Irena represses her sexuality out of fear that it will unleash a beast in her, foretold by her homeland's folktales. The students had plenty to say about the subtle workings of Lewton's film and picked up on the skillful uses of sound particularly in the stalking scenes.

After a lunch break (which I forgot yesterday, no wonder they looked so wan by the end), I talked about the 50s SF horror films for a bit then started up Night of the Demon (AKA Curse of the Demon). Based on M. R. James' "Casting the Runes" it tells the tale of a Crowley-esque occultist sparring with scientific sceptics via supernatural means.

You may know it as the source of the line, "It's in the trees! It's coming!" in Kate Bush's "Hounds of Love". My students, I fear, will always know it as the dvd that suddenly stopped playing ONE MINUTE before the end of the film. Howls of disappointment. I did find a link to a YouTube video that shows the very end, so I emailed that to them, but --

One other thing about this film: It has a scene in the British Museum manuscript reading room.

I myself have read occult manuscripts in that very same room but somehow escaped without being attacked by demons.

I have just killed a damon in my story but I didn't find it too horrible. But if you ask me to watch horror movie, I will close my eyes...

And you don't just watch, you teach, hmmm. Brave girl!

Ah, yes, Scott -- the old manuscript room. The new British Library doesn't have the same charm as the old, though I must admit I love what they've done with the rotunda ceiling (which I use as the backdrop for my Twitter profile).

Enid -- fictional horror is fun and often cathartic. I prefer to avoid the real life kind as much as possible. Writing it is different altogether. You know who pulls the daemon's strings!

I wish my professors had classes like this!!! Curse of the Demon is a fave of mine! Cool monster!

You sound like a wonderful teacher. Your students are very lucky (despite forgotten lunch breaks and technological issues).

Sounds like you're having a lot of fun with the class!

Excellent choices, and I hope the set-up allowed for the maximal effect of the sound effects (particularly the bus), which works so very well in a true theater and loses something in a typical tv setup (then, other effects, such as the room illuminated solely by light tables, are difficult to damage). The various remakes of CAT PEOPLE can't touch it, no matter how decorative Kinski and O'Toole (and possibly even some of the men) might be, and even how good their performances (certainly good enough, albeit they can't rescue the script from goofiness, much less of which in evidence in the original, except where inteneded).

NIGHT OF THE EAGLE/BURN, WITCH, BURN! is an excellent counterpoint to NIGHT/CURSE OF THE DEMON, even as THE HAUNTING and PSYCHO will remain paired in my mind (aside from the fact that they were miserably remade in coloful bad taste in quick succession).

Nothing more annoying from having to fight the demons in the reading room, then going to take a dip in the pool to cool off only to have ones belongings shredded. Makes one consider joining a less eldritch club, but there is tradition to consider. And the members' parking.

Oh, it always comes down to parking, doesn't it, Todd? Especially in NYC or London -- although the proximity to a good pub counts for a lot and I've been willing to put up with any number of daemons for a pub without tv screens.

For me The Haunting will always be paired with The Innocents and not just for Kate Bush (who also links to Hammer Horror -- man, she wasted a lot of time watching films ;-), but for the first time I saw the two as a double feature. We had a blast talking about Wise's film today. Took very little prompting to get them to latch on to the lesbian subtext. They did an excellent job with pulling apart the effectiveness in sound, lighting and set dressing. Yay!

Is your list of films settled, or still fluid? If settled, have you posted it anywhere, or are you playing close to the vest, to keep the suprise going for the students or to keep pompous blowhards (koff ME koff) from giving too much guff?

ONIBABA! THREE CASES OF MURDER! THE MASQUE OF THE RED DEATH?

Yeah, if anything, the lesbian currents are more blatant in the first film than in the pathetic recentish second, if not so much as in the novel, to say nothing of what I've recently referred to as a heavy-breathing response to the novel, Richard Matheson's HELL HOUSE (I forget if the film of that one excises the lesbianism altogether, which I suspect it does).

The class sounds awesome! Some of those 50's horror movies are real classics. Kudos!

LOL -- I am playing close to the vest largely because I want to leave my options open as long as possible, allegedly pompous blowhards notwithstanding. I will hint that I am hitting the drive-in groove tomorrow with a certain seminal zombie outing.

"They're coming to get you, Barbara!"

Re: lesbian subtext -- I have always loved teaching the book, having students adamant that things are there in the text, spelled out, and then of course, they're unable to find anywhere that Jackson spells out the nature of "Theo's friend" -- nowhere. Jackson is wonderful!