Jean Paul Sartre is rightly famous for suggesting in his play Huis Clos [No Exit] that hell is other people. 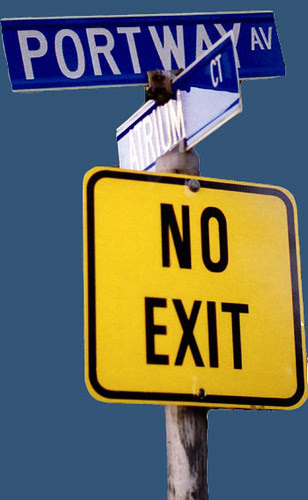 I would amend that by saying hell is in fact meetings with other people.

To be fair, the meetings I had to attend today have been necessary and informative. But the shock of suddenly being surrounded by lots of people for extended periods of time is always a little overwhelming; particularly when you've spent a good deal of the last few months quietly with little company. At home we have the radio on much of the time, but that's as close as we get to a crowd on most days.

I know, I know -- I was at a few big conferences this summer, but it's not the same. You move, you circulate, you go to your hotel room. You can take a breather (so to speak) in the ladies room without people beginning to wonder if you're having bladder trouble, because nobody is paying attention to what you do (unlike at meetings where everyone else who is not fully engaged in the proceedings is wondering what's up with you sneaking out of the room so frequently).

It's all part of acclimating yourself to the fall semester...
Posted by C. Margery Kempe at 14:47

Email ThisBlogThis!Share to TwitterShare to FacebookShare to Pinterest
Labels: anxiety

I hate meetings, period. They're usually horribly unproductive. You can get more done with an hour's worth of email conversations.

I agree for the most part, although at times there is brain-storming that can only be done symbiotically. Although I suppose IM could work for that, too. I know my pal Susan's workplace uses that.

One advantage: the next Women's Studies meeting will be at the Washington Tavern. This is a good group to belong to ;-)