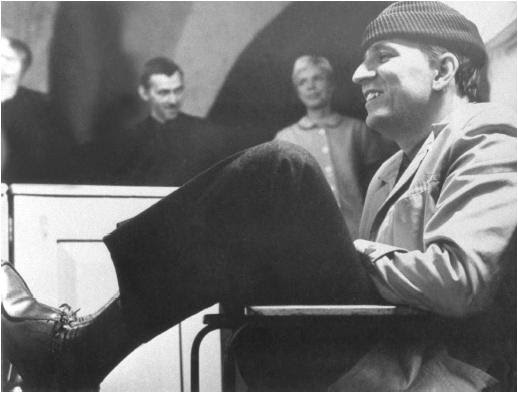 We watched the Dick Cavett interview with Ingmar Bergman last night to remember (Thanks Jane for letting us borrow the tapes!). It was very interesting, of course, not least because Cavett sat back for the most part and let him speak about everything from his restless legs to his brief foray into psychoanalysis. Bibi Andersson, who joined them for the second half of the interview, had a very different memory about what had occurred. Bergman said the psychiatrist declared him "too healthy" to need therapy; Andersson said that the shrink had feared that removing any one of the myriad neuroses might affect his filmmaking.

There's a Bergman film in a nutshell: one reality, very different experiences of it, and halting attempts to bridge the gulf between those perceptions.

There's a nice remembrance at Slate (thanks, Gene!) and elsewhere, but the best remembrance is of course any of his films. I recall knowing about The Seventh Seal long before I saw it, rather as it was with Casablanca. The surprise with both those films was the warmth and humor they contain, which did not fit my naive view of "important" films. They are both a joy to see.

I received a clarifying question regarding my essay on Bergman and Craven from the editor of the film and folklore collection. She says it's in final proofs now, so it will be coming out soon (well, soon in publishing terms). Bergman's art continues to be very much a living tradition.
Posted by C. Margery Kempe at 11:20