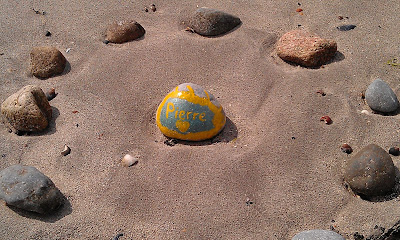 Making your mark in the world can be a tenuous thing; as long as the good will of others holds up or their indifference doesn't take over, you stand the chances of being forgotten within your lifetime. You may find fame and fortune, but the odds are against it. So don't be depressed by that! Make every day fun. Create something, anything. I made a lovely postcard for a friend this morning with my Tate Mod postcard book (a book of blank postcards of heavy paper stock) with my watercolour pencils and it sort of turned out like I imagined it.

I got paid very well for a very short story: that's success, too. But it can't be the reason for doing it because writing takes so long even for a rather short story. The pleasure of creating, of figuring out the myriad puzzles that go into anything you make, that has to be its own reward -- often it will be the only one you get. Hey, I didn't say stop trying for more mundane success -- keep at it. As the lottery ads in NY say, "Hey, you never know." You stand a better chance at succeeding with your creativity that you do with the lottery anyway.

If you need a laugh, go read my silly poem "On Seeking a Place for a Picnic." If you want something more substantial, go read my reviews and whatnot over at A Knife & A Quill. Or go "like" our Burning Bridges book trailer: it's got a "dislike" -- I suspect our former publisher has found it.

All right, enough delay: let me announce the first annual Postcard Fiction Contest prize winners. First, let me thank everyone who entered. I was well pleased with your cards and stories -- some of you went all out and I have to say the postcards did enter into my deliberations. How could they not?

So I read and re-read and finally narrowed it down to three finalists. Because I promised a cash prize for the top winner, I decided I needed some other kind of prize, so it will be titles.

DICKINSON PRIZE (AKA second runner up)


MOORE PRIZE (AKA first runner up)

"mbilokur" for 'Better the devil you know' on postcard of Frida Kahlo, Diego Rivera & a giant papier maché demon

'Don't do it, Salvador!' The lemur sounded more alarmed than she felt. Dalí was always up to some sort of ballbaggery and usually came out of it quite well. A token protest was always welcome to the artist's ears, however, and the lemur liked to please. 'Do not fear, my little one,' said Salvador, 'nothing can go wrong. This world is but an oyster in a jam jar ripe for the taking.' The lemur watched as Salvador pushed himself from the balustrade and swan dived out into the empty space. He hung there for a moment, or so it seemed...and then plummeted to earth. The lemur watched him hit the ground. 'Oh dear,' she said. 'Who does he suppose is going to clean that up?' 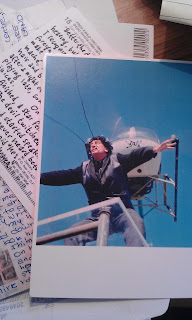 Thank you, Prof! I am beyond chuffed - I am, in fact, a veritable chuff weasel! Xx

A delight, of course! Wonderful to read :-) enjoy lovely Cornwall, land of Laitys who are unrelated to me.