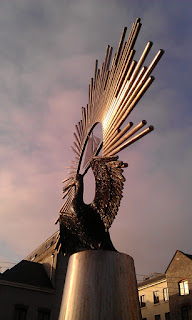 Another Sunday has rolled around; in the States it's Mother's Day, so happy Mother's Day to my mother and all the other mothers out there. It's also Six Sentence Sunday, so I've selected another story to tease you with. It's definitely a tease, because while I've sent the story off to my publisher in Italy, I don't know exactly when it's coming out or even if it will be available in English (I think so). It will be part of a series of sexy noirish tales set in different cities around the world -- yes, another publication venue that Mr B pointed me toward.

The story is named after a local landmark, this sculpture that appears on the Claddagh side of the bay, which is doubtless hardly surprising. Across Grattan Road there's another statue which really does look as I describe it in these opening lines. I enjoyed finding the voice of this character. As you might expect, I've spent a lot of my time here listening to the ways people talk:

I first saw her standing by the icon. I was saying hello to Father Burke's statue as he raised a glass to the offie across the street and thinking about indulging myself, it being a grey sort of day that calls for a smoky glass of the gold nectar. Under the halo of the icon, her golden hair glowed. The cormorant rose above her as if to proclaim her beauty to the world. I'm not sure what the boat represented: maybe it was my hopes sailing away...

This story won't be for everyone: steamy! And noirish, so not everything's going to go well for everyone. I'm enjoying the crime groove. My head's full of interesting ideas.