Hold on there, cookie! The Third Man, that classic Orson Welles film -- overlooked?! Well, yeah, I dare to say it. I say it on the basis of so many people who are not film geeks who've either never heard of it though they might recognise the title or those who maybe know Welles from advertisements only or are geeks and have been meaning to see it for years (o_O) hmmm? 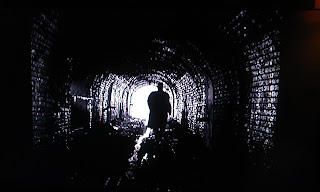 This time around I saw it differently, too, because it marked the first time I consciously watched it as noir (and for the cats). So many things I have in the back of my head about noir, it's good to make a conscious effort to consider the building of scenes and the building of the story in Greene's script (I have to read the novella!). Cotton's stumbling 'pulp' writer [in scare quotes because Todd will tell me he's not pulp at all but I don't know exactly what is textbook pulp and what is not because it seems a handy designation for a vast range of writers who wrote for cheap paperbacks in the early 20C and if it only turns out to be people who wrote for specific publishers who printed on PULP™brand paper during the odd months of the year 1935, I'll never remember that, so -- scare quotes] gradually uncovers a mystery when he thought he was just coming to a funeral and then things get weird as he finds out his good friend is nothing like the man he thought him to be.

(Somehow this relates today's thoughts on Dunning-Kruger, too -- not sure how). 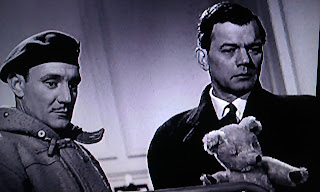 This film has such amazing and utterly gorgeous shots, not as distinct frames like so many current films that scream "Look at this shot!" but as an organic whole that tells a story. A compelling story: how to deal with competing views of a man you've trusted? How to deal with a woman you love who's still in love with your best friend? And a very Greenean quandary about making moral choices when the options are not the black and white ones you were taught to distinguish between.

I ended up paying much more attention to the look of the film but the narrative kept pulling me back in. It remains a classic not just because it is a superbly directed film, but also because it tells a compelling story. And while it makes you despise the smug Harry Lime (whether or not he was right about cuckoo clocks and Borgias), you can see how he represents a very common type -- the ones who looted their way through half the economies of the world with every belief in their right to do so. 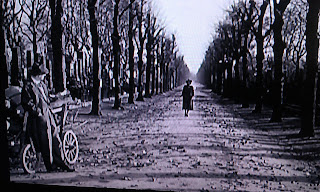 Could you walk away from such temptation?

See the round-up of overlooked A/V over at Sweet Freedom.

Well...if Ed Gorman gets in with D.O.A., only slightly less unoverlooked than this one...

I promise, next week's is definitely more obscure (assuming nothing changes in a week, but as I already wrote notes for it, I can guess that it will have a sudden surge of interest and my comments will be old hat by then).

I read THIRD MAN last year and discovered that the story was originally intended as a film. The print version is the original "script".

I seem to recall Greene saying that he had written it to get the film sorted in his head, but always with that end in mind. Did it read very much like a film?