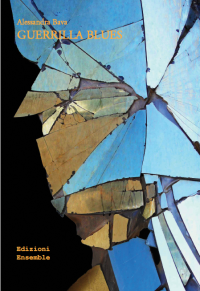 
People tend to think writers give their friends good reviews because they're pals; the truth is you become friends with people who write stories or poems that inspire you to be better, to do more, to aim for dizzying heights. My jester -- the poet of Rome -- Alessandra's new collection offers wonderful evidence of that. Inspired by poets and revolutionaries the poems converse with everyone from Che Guevara and Simone Weil to Artaud, the Beats, Akhmatova and Pasolini. All are people who burned with inspiration and a revolutionary zeal.

That's the fire that burns through these verses. This dual language edition shows how Bava shines with incendiary passion in both Italian and English. Setting aside the incredible skill that speaks to (composing poetry in one's childhood tongue proves challenging enough, but to practise the art in another tongue --) the inherent desire to find as wide an audience as possible. In Bava's hand poetry is not a detached art of the drawing room, but a call to the barriers and a shout in the streets.

Every line forms a potential molotov, from the titular poem's description of "Tattered books / of flesh as bomb / shrapnel / bleeding truth" and the ringing lines of "Sons of Disobedience" with its lines of fury, flesh and teeth. "This is No Chimera" speaks to the forces of acquiescence and conformity that press upon us all, maintaining that "The only requirement / is to believe in / hazardous deeds" lest we turn into Gregor Samsa-like bugs as "Wake Up!" warns, too.

demand attention:
the poet is You.

As a medievalist, I always despair of people's dismissal of the time especially early works like this epic poem. Most people -- if they're exposed to it at all -- get it in school, taught very badly by someone who likewise knows nothing about the poem and its context. I wish I had a dime for every student who expressed surprise at the poem being nothing like they encountered in high school (hmmm, maybe I do...). So I'm always pleased to see attempts to introduce readers to the poem in new ways. Gray and Yates' volume attempts to bring the old story to new, young readers with bold illustrations and a simplified story.

The illustrations capture a dark mood of adventure; they're sufficiently gruesome though only suggestively so -- safe for parents, inviting for younger readers. Gray's text reduces the story to a speedy series of adventures in the conquering of the three monsters with efficiency and some flair. Hrothgar's "sermon" gets boiled down to its essentials: don't let pride rule, when you're king you're responsible for more than just your fame. The publicity materials refer to this as a "verse adaptation" but it reads like prose, but the language is lively enough to be engaging.

There are some contextual errors that made me give very Biggs-ian head snaps: wet suit?! Surely even a child completely ignorant of the time period would know that a wet suit is a very modern invention. A sword does not go into a "holster" and Heorot is not a "castle" in any way. None of these anomalies are quite as egregious as the mistakes in Cigale's introduction conflating time periods, clearly unfamiliar with the difference between a scop and a bard, and missing the cadence of half-lines. But he highlights one lynchpin of this adaptation: the eternal bond between fathers and sons and "all men", which is apparently the aim of all storytelling.

Because there are, of course, no women in this telling of the story (monsters excepting).

I feel like banging my head against the wall again. Why is it the 11th century monks who wrote this story down in England can have more regard for the importance of women than 21st century (seemingly) secular men? It's not as insulting as the Zemeckis film, where women are reduced to powerless concubines, but I'm mystified by this need to completely remove women from the story in order to glorify men. Is that really the message to give your sons? That they somehow exist outside the world of women and girls? I hope not.

It finally occurs to me to ask if Ms. Bava is related to Mario.

And, at least, no integral stiletto heels, but losing women altogether is a very poor way to avoid that pitfall...

I seem to recall her saying once that perhaps very distantly. Yeah, I don't get the impulse to banish women entirely as if men can't be men if we're hanging about (-_-)