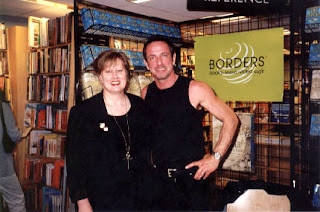 Today's six come from a pivotal story in my life: not for its quality (though I find some things to enjoy even now) or because it was my first "official" publication (though it was) but because it brought me kind words from Clive Barker. His Lord of Illusions short story contest inspired me to write this story of a child preacher and the apocalypse that begins at Disneyland. I think Clive had been on some talk show mentioning how much the ride horrified him (as it does all right thinking people) and suddenly the idea was there.

I won the contest, which was cool; even better were the kind words in the letter he wrote me to tell me my story was full of "fluent style and poetic dialogue" and the big hug I got when I first met him and told him that I wrote that story. Clive is a swell guy: every time I see him, he seems to remember me (considering how most people seldom remember me, that's a lot). I have seen him greet the last fan in a very long line with the same enthusiasm he had for the first. It's a good life being an imagineer.

This story appears in full at the official American Clive Barker site.

Michael snapped open his folding-table by the exit of "It's A Small World," one of his favorite spots, despite the risk. The scissoring legs telescoped toward the pavement and locked with a pleasing thwack. Other children, some younger, eyed him surreptitiously, waiting for the show to begin before committing to the spectacle.

In a single practiced motion, he slipped the heavy book from the crook of his elbow to the slanted table-top where it opened at will. Not by my will, but by Thy will, Michael repeated silently with satisfaction. He shaded his eyes to scan the well-tanned pages.

Stop by the Six Sentence Sunday blog to discover new writers!
Posted by K. A. Laity at 07:00

I'm so impressed. I'm a huge fan of Clive Barker and, especially, his Abarat series. Way to go! I'm going to surf over to his site and read your story. :)

Thank you, Lorijo! I am a huge fan of Clive too, even before he wrote those nice things :-) It's always wonderful to meet a writer you admire and find them just as delightful in person.

By the way, I read your short story and loved it. No wonder you won.

Oh, thank you so much! You're very kind.

What an intriguing six sentences and concept! I enjoyed them and the picture they created!