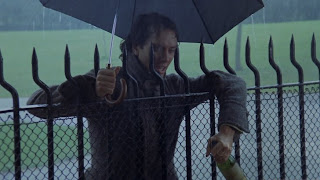 Patti Abbott has challenged folks again on the topic of the zoo: here's mine with apologies to Edward Albee and William Shakespeare and Bruce Robinson as well. So there.

"I thought it would be dramatic."

"Not exactly. That scene was filmed here."

"From the movie, you know the one."

"The funny one, with those two guys and the drinking and—it's very funny. You liked it."

"But there's that scene where he quotes from Shakespeare."

"No, whatsit—Richard! Richard A. Grant."

"You do! He was in that movie and in lots of other ones. Tall bloke, gaunt looking, theatrical. He was in the Spice Girls movie."

"I don't remember. Anyway that's not the point."

"What is the point?"

"He was giving that speech from Shakespeare, right here, by the wolves."

"No, not that one. The one with 'quintessence of dirt' in it. Oh, you know, it's a famous one. Macbeth maybe."

"No, not ringing any bells."

"About the nature of man…"

"No, not that. Oh, you know it—I can't remember now. It was raining down and he was reciting it to the wolves."

"Why to the wolves?"

"Because they were there. His friend had gone."

"What was his friend's name? Maybe that will remind me."

"I can't remember his name. I'm not sure the friend ever gets named."

"In the whole movie? No one ever says, 'Hey whatsyername, answer that phone' or something like that?"

"No. I mean, I'm pretty sure. The film's from his point of view. They go see the uncle and he gives them the cottage and they go on holiday."

"Oh, yeah, I kind of remember that one."

"Anyway he has that speech—"

"The other one, all right. But he gives that speech at the end of the movie and his only audience is the wolves and it's very significant."

"Well, because he goes on to be a great actor and you can see it in that moment. It's the beginning of better things."

"So I thought it would be appropriate—"

"It's about man's place in the world, the sky above, the ground below and how grand it all is. Quintessence of dirt."

"What does that mean anyway?"

"Wouldn't that be a bad thing though?"

"No, not really—I think you're missing the point. It's poetry like."

"But it must mean something. If you're the epitome of dirt, you're still dirt."

"But don't you see—I mean, it's Shakespeare. Poetry."

"Well, not necessarily ironic but poetic. What's the word? Metaphor."

"Metaphor? That's when you compare things?"

"So, what? The wolves respond to metaphor? Oi, wolves! Metaphorse for me."

"Evolving. What would wolves evolve into?"

"What was the subject? This stupid movie?"

"What about it anyway? You can't even remember what Shakespeare it's from."

"The play's the thing—isn't that Shakespeare too?"

"Probably. But what I was saying—"

"Every famous quote comes from Shakespeare, doesn't it? Why is that?"

"All the world's a stage, the play's the thing, the face that launched a thousand ships…"

"Are they all from Hamlet? No some must be from comedies. Wait, Hamlet—that's the one. It comes from there."

"Lots of good ones come from that play—isn't it bad luck to say the name? 'Bare bodkin': we always had a giggle at that one in school."

"And there's a joke about privates, too. Miss, we'd say, could you read that part again, we didn't understand it. Hilarious!"

"Never mind that. I was talking about—"

"Do you suppose writers do that on purpose? Put in jokes like that?"

"That little box you threw into the pen."

"Look, that wolf is trying to eat it. What is it?"

"Nothing. Never mind. Let's go have a drink."

This utterly brilliant. Loved it. Thanks so much. Richard Grant is the one I never can think of too.

Thanks, Patti! It was fun to write. Glad to be a part of the meme. Now to check out the others.

I can hear it in the voices of Pete and Dud...good show.

Well, considering it's a couple who almost but didn't quite get engaged, that's interesting...

(Which is to say, I read it too quickly, and didn't tie going onto the better things with the potential of a boxed gift...)

And I thought I was losing my touch there! Funny because I have a very Pete and Dud sort of project that's looming on the horizon.

Not losing touch, though not quite enough establishment of who's who here. (I, however, am null-marriage ritual, and have rarely if ever come across so pompous an individual (On To Better Things!) who couldn't be bothered to speak plainly about their desire...the tact might gibe with the conceit, but rarely so.

Interesting that wolves and primates are the most often featured animals in these stories. A Jungian collective thing going on?

Thanks, John. Hmmmm -- I'm not surprised at apes; they seem to come up as the way a lot of writers use them as the most outwardly similar animals to us in order to emphasise our difference. I have wolves on the brain lately, so that's my excuse. Maybe it's just the people Patti runs with! ;-)

I hope the ring didn't cost too much. :) I do like stories told in dialogue very much. This was a lot of fun.

Kate-Could you email me? I want to ask you a question about hotels in Galway (if you know of any) and don't have your email for some reason. Mine is aa2579@wayne.edu

Thanks, Yvette -- I think it's an indication I should get to that script that's been asking to be written.

Aw, cheers and thanks, Thomas.

Nicely done! I love all dialogue stories especially when the authors make them work as well as this one.

Sandra, you are very kind. I am still reeling a bit from John comparing one of my idols, Tom Stoppard, but I have to say, I'm really going to be quite big headed this week with all the praise!

Great dialogue. I like the fact that I have two scenes going in my head - the one from the movie, and the one discussing the movie

Thanks, Rob. That was how it felt while I was writing it, too. Very enjoyable :-)