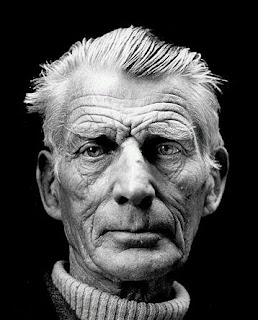 Beckett is funny: people seem to often overlook that fact. Productions of Waiting for Godot that get that fact tend to be much better than those with dour seriousness. You put his craggy mug up there and suddenly it's art with a capital Arrrr! Slapstick is a fundamental element of his work however, so no surprise that he worshipped Buster Keaton. Yes, Keaton by 1965 suffered the effects of his dissolution, but it suits the haggard bemusement of his character in this short film. Beckett himself referred to Film as "an interesting failure"; considering how many dull successes fill the theatres at present, that seems infinitely preferable.

As always, check Sweet Freedom for the round up of other gems. If you watch this on t'Tube you'll see a bunch of other videos featuring both Beckett and Keaton; indulge yourself. Another great resource for arty indulgences, if you don't already know about it, is UbuWeb.

You could be speaking of both Keaton and Beckett...

True enough: whereas women's faces of the same rough tread would be considered horrifying to most of the western world.

You are in a definite minority in American culture. One of the joys of not being in the States is not seeing the constant barrage of bland sameness and artificial 'beauty' in the media. I shudder to see the horrifying things women (and some men) do to themselves to look 'young' -- I can barely stand to see Madonna anymore. Just horrifying.