Friday's Forgotten Books: The Life of Christina of Markyate 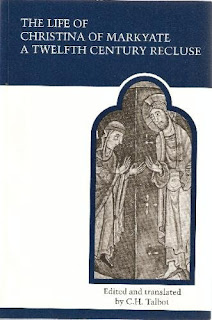 I don't think there's much chance of overlap with this week's choice. The life of a twelfth century recluse: it doesn't scream popular appeal, I suppose. But it should! A fascinating story and an early biography of a woman in a time when few but kings and saints got their stories told (fortunately at least someone important considered Christina close enough to the latter). I have begun writing a play about Christina's life in hopes of making it known to a broader audience, but as with so many things, it has had to wait in the queue for a bit. I have actually been spending these months in Ireland completing long delayed projects and jettisoning ones that are no longer relevant to my path.

Of course my brain insists on constantly coming up with new ideas, so it's a rather hopeless cause. If I had all the time in the world, it still wouldn't be enough.

Christina is born in Huntingdon to noble Anglo-Saxon parents, Autti and Beatrix. The story is a dove flew over to Christina's mother from the monastery and nestled in her sleeve and stayed there a week while she was pregnant, demonstrating of course that the child was touched by the Holy Spirit. You'd think after such a clear sign, her parents would resign themselves to offering her to the church, but no.

They get her engaged to a rich young man despite her protests that she'd like to devote her life to quiet contemplation. While we tend to think of the church as a repressive organisation in the current age, for women in the Middle Ages it offered one of the few opportunities for independence and a little authority (assuming you weren't born to a royal family or likely to be married into one). So they married her against her will, but she refused to consummate the marriage. So the bishop tried to rape her to make her more compliant; in a hilarious scene, she's divinely assisted to resist him.

She ends up running away to live dressed as a man with a monk: talk about a modern gal! Eventually she's allowed to take up the life of a recluse as she wished, but there are always problems. Christina's peerless conduct evokes envy in others and she has to frequently chastise her superiors because those men would rather wheel and deal wealth than praise god. So it's a busy life, fighting off demons and receiving prognostications from the Holy Spirit -- and only a few recognised her for what she was:

Hence, some of them called her a dreamer, others a seducer of souls, others more moderately, just a worldly-wise business woman...others who could think nothing better to say spread the rumour that she was attracted to the abbot by earthly love.

It's a wonderful capsule of twelfth century life; it's a familiar tale of the difficulties of being an exceptional woman. The Talbot edition has a terrific introduction, but can be a bit pricey unless you find a used copy. There's a more inexpensive edition of her life available now:

Drop by Patti Abbott's blog for the round up of other FFBs.
Posted by K. A. Laity at 08:28

Gives a rather old twist to the notion of the bishoprick...and, you know, I was going to cover this one, or at least Christina of Marykate's story in the September '78 issue of F&SF...the church a haven, of sorts, if you could escape the bad bishopricks, if you were of the proper class, I seem to recall...so, you might not be likely to marry royalty, but a true peasant might be SOL.

If all you see is a pun, then you're not reading what I've written...but if you're simply groaning about the state of humanity then and now, well, I see your point.

Or, that's what she groaned.