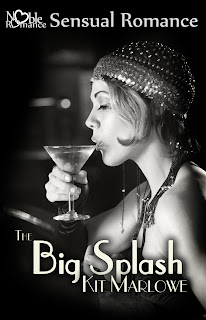 I had the best time writing this story. After reading too much P. G. Wodehouse (too much? is that possible?) and some Winifred Watson, I was full of madcap story ideas and thought it would be fun to try to set a story in Jazz Age London. I wrote The Big Splash in a kind of fever over the Christmas break between semesters. It ended up being a novella instead of a short as I intended, but I had such a grand time inventing my own Bertie and Jeeves. I have an idea for a new one, so Constance and Collier will get another outing soon. Here we meet the best friend, who makes our heroine look positively sensible in comparison. Yes, of course I found an excuse for someone to say that immortal line.

Both their heads turned at a sudden outburst of noise. As Constance suspected, the sound accompanied the arrival of her friend, the irrepressible Hardie. All of her entrances seemed to include dropping things, making loud excuses, and happily shrieking greetings, though at times they had also included gunshots, fire, and the occasional oran-utang.

"Con-stance!" Hardie shouted across the room as she bashed into a small planter, then corrected her path by jostling an elderly judge who harrumphed most alarmingly. His equally ancient partner brought up her lorgnette to examine the madwoman who walloped her way across the room, leaving destruction in her wake.

"Constance, darling! What a delight to see you!" Hardie grabbed her shoulders and kissed each cheek in turn as if they had been parted for years rather than the space of a mere day and a half.

Be sure to check out all the Six Sentence Sunday posts and discover some new writers.