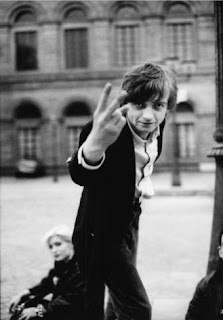 I've been getting all noir lately. I blame Mr B. Ireland's so lovely, but I've been setting stories here that are undeniably grim. So I blame Ken Bruen, too. While I'm spreading the blame around, might as well point a finger (or two!) at Mark E. Smith, too. If he hadn't written a lyric like, "A serious man /In need of a definitive job /He had drunk too much /Mandrake anthrax," then I wouldn't have had the idea for this story, which first started up on Twitter. Let's blame Twitter, too, shall we? It worked for Franzen.

Hanley eyed the brick façade. The door proved to be a gothic affair, metal bound and painted all black. Seeing no modern convenience, he lifted the oversized bat knocker and clapped it to a few times. They both craned their ears but all around them it was suddenly as quiet as death, as if all the people had walked hand in hand into the bay abandoning the city behind them. Hanley shuddered.

When he had just about surrendered all hope and began to get thirsty for a tall foamy pint, the door groaned open to reveal a disheveled looking eurotrash reject of indeterminate age...

You can read the whole of this bleak little tale over at A Twist of Noir. While you're there, read some of the other fine stuff they've got.

Drop by the Six Sentence Sunday blog and sample some new writers today.
Posted by K. A. Laity at 07:00

Excellent snippet--love your descriptions and the way you bring the scene to life. I was right there, could smell the air, feel the night, the cold of the metal door. Great job--thanks for sharing!

I love your natural sound you have in your writing...flows so smoothly! Great six.

Many thanks, Guilie and Christine. It's hard to capture a reader in so few words. I'm pleased to hear it's come off well.

I loved the line: "as if all the people had walked hand in hand into the bay abandoning the city behind them." What a great image! Ominous! :)

Thank you so much, Lorraine. There are days when it feels like that here in Galway. For such a busy city it has really eerily quiet spaces at times.

Definitley noir and some amazing scene-setting! Great word choices and enough description to paint the picture without being heavy-handed. Now pardon me while I smooth down the goosebumps on my arms.

Wow, Silver -- that's so wonderful to hear. Thank you!

I love the darkness and depth to your voice in this piece. I am drawn into the time and space of the milieu. Give me more! ;)

Angela and Candice -- thank you so much! Wow, I guess I should keep running with the noir vein I'm in lately :-)