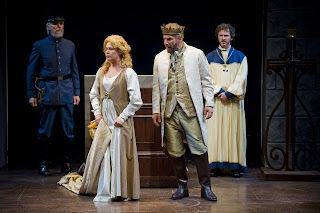 I set off Sunday for a Shakespeare double-header with my theatre buddy, Ron, and got all the way to Massachusetts to fill up on cheap gas before I discovered that I had left my check card in the cash machine: D'oh!

We got to Shakespeare & Co for the first order of the day: A Winter's Tale. I had seen a production last year at the Old Vic with Sinead Cusack and Simon Russell Beale, part of Sam Mendes' Bridge Project. It's not ever been one of my fave plays: it's got an awkward juxtaposition of tragedy and comedy that I've always found jarring. Shakespeare uses one of his favorite ruses: the capricious monarch. Of course he always gives them good speeches to sell that caprice. Leontes gets a good one here and the staging and Jonathan Epstein make it convincing, and Elizabeth Aspenlieder makes you weep for her. The wacky second half in the wilds of Bohemia were funny and even included a fantastic dance by the horned men in masks. Truly pagan!

We walked the grounds discussing the play afterward and decided to make it a triple-header by attending the free performance at the Rose Footprint Theatre, a pastiche of the Bard and the theories about "the real Shakespeare" performed by the interns in the Training Institute. It was a lot of fun. I had seen many of the same actors in the lively performance of The Comedy of Errors earlier in the season. Much fun and we didn't regret that it left us a very short time for dinner. Fortunately there were still box lunches left so it was possible to have a well-balanced meal before the final play. 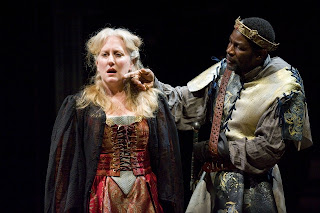 Yes, I had seen Richard III before. It had been in previews yet, so I was intrigued to see changes. Wow, it was tighter than ever and John Douglas Thompson just as riveting as before (and my how he can schvitz!). I love how they make the crowd complicit in Richard's elevation. It is glorious fun. While Richard is the center of the story, it's really the women I remembered most, from cursing Margaret (Elizabeth Ingram), mourning Ann (Leia Espericueta, who was hilarious in A Winter's Tale) and the tragic Elizabeth embodied by the amazing Tod Randolph, who goes from casual confidence to beaten weariness by the end. A fantastic production: it was closing day for the summer season, so a lot of the actors were gathering with friends at the end of the day. A celebratory mood: it was certainly earned. Well done, S&Co.

Work beckons: so much to get done. Where's that idleness that my pseudo-sabbatical was supposed to bring? Oh, I did do one useful thing: I got an excerpt of Pelzmantel up on Scribd. Don't know why I didn't think of it before!
Posted by C. Margery Kempe at 13:12

Hey, that was a great day! Glad to have your tale, and the many links I'm not sure I ever would have found. I thought this performance of TWT beautifully and powerfully resolved the contradictions you mention, indeed I was blown away by it! R3, as awesome as it was, came nowhere near the same level of emotional impact, for me. But that said, the women in both plays were incredibly moving. What amazingly talented players, it was a privilege to see them perform.

I am the link master! I do love the company at S&Co. I have never found Winter's Tale as engaging as this performance: it really was quite remarkable. Epstein made me believe Leontes' transformation, and, if not sympathise with his fury, understand it.