My latest column engages with an old topic:

If you were living under a rock you might have missed the fact that television personality and part-time poker of hot topics, Bill Maher, resurrected footage from a decade or so ago showcasing rabid right-wing American Senatorial candidate Christine O'Donnell, darling of the Tea Party and self-confessed non-masturbator, as she admitted to hanging around with questionable young men and "dabbling in witchcraft,", words which have rung across cyperspace via snark express ever since.

No, it didn't help that she was sitting next to Clive Barker as she spoke about it—clearly part of the monolithic illuminati of the Gay Agenda, which operates by making rabid homophobes kind of gay.

The dividing lines are clear: on the sympathetic side, cries for a moratorium on youthful transgressions (hmmm, when did we last hear that?) and a waving hand of irrelevancy.  Yet—perhaps not that surprisingly—among the wackiest of the wack jobs—i.e. Karl Rove—there is also a concern to "cleanse" their candidate to a pristine, non-masturbating, no-premarital-sex purity. In other words, they want her to clarify her "witchy" past and show contrition and a will to do penance (oh, wait—wrong branch of the monotheism) for the error of her ways.
Read more: http://news.bitchbuzz.com/christine-odonnell-good-witch-or-a-bad-witch.html#ixzz10RqdM2az
It has proved incredibly popular, generating a lot of retweeting and Facebook repostings, as well as a long conversation on my Facebook wall. The funny thing is I saw that show when it first aired and remember it -- though I didn't remember her specifically -- because of course Clive Barker was on the show. He appeared a few times; I think he's pals with Maher. The insanity around this non-issue really steams me. We have so far to go yet: it often feels discouraging.

The best cure for discouragement: hang out with people full of energy and hope! Out at my friend Mary's with a bunch of people for a full moon/equinox bonfire last night. Have you seen the moon the last couple nights? With Jupiter hanging out nearby? Gorgeous. Mary has the most incredible sanctuary and the most amazing gardens, too. Incredible to see the gigantic blooms of the moonflowers in the dark. She told us to take one home, so I did. Enormous, isn't it! As wide as the length of my hand. 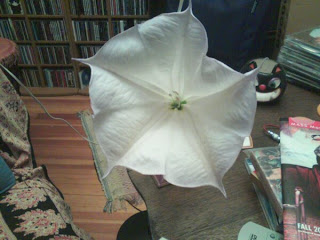 FWIW, Rove resents the Tea Partisans of Delaware for spurning his advice and stewardship, much of the reason Turd-Blossom is so adamant (that and MacNoNoNasty probably will lose, when if Mike Castle had been the GOP candidate he probably would've won handily).

But, golly, them witches are almost as bad as them godless.

I have lived too long to see the country come to this.

Between reactionary Republicans and in varius ways cowardly or conservative or both Democrats, I just keep seeing this country running around in circles throughout my life...we just get to be more aware of who gets hurt these days, if we choose to be. Of course, the hurt is getting more spread around than it has been at any time since the last depression, making entirely too many folks willing to embrace the bullies' solutions and explanations...surely it can't be the successful messing the rest of us over, becaus if God didn't mean for them to have everything, why would they be? It must be the lazy poor, os their Secret Masters, exploiting us...since so many have been raised with resentment of those folks even as they resent women who suggest that women's (and men's)roles were not ordained by Daddy God and that Daddy God might actually have One True Faith, but who knows which one that might be--Oh, silly me, it's mine, or yours, (not really, you heretic).

That is a pretty flower.

"That is a pretty flower." Somehow after all the depressing political commentary, that was just the thing to hear and I laughed out loud with delight.

Politics in this country is at a swirling standstill of corporate control and reactionary rhetoric. Sanity has no place at the table.