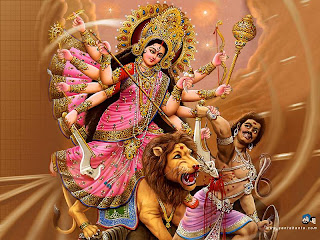 So this is how the whole of September has felt: me as Durga with at least eighteen arms and too much to do and people standing in my way who need a good poke with a sharp stick.

Where's my lion? Or tiger! I will take either.

Part of it is the normal start to the semester: the first week of classes hits like a steam engine out of nowhere even though I know exactly when it will arrive. Somehow I always seem to find myself standing on the tracks. While this is supposed to be my "pseudo-sabbatical," administrative tasks for myself and for others (writing tenure letters for two folks today) have taken up an awful lot of time. The hope is that October and November will actually be writing intensive times for the non-fiction project, but argh! So far there's been no progress on that.

Not that I haven't got writing done: just not what I planned. And there's editing to do, too. Fortunately, the editing for Kit Marlowe's first publication -- the novella "The Big Splash" -- went swiftly. My editor had few changes and a couple of questions re: period slang (it takes place in 1929 London) -- she also said it was "hilarious" which made my day! The big editing job is getting to The Mangrove Legacy, Kit's next publication. I haven't had much time to work on that comic Gothic novel, but I have to make it a priority now.

I do have a new publication, though it will be of interest to fewer of you: a review of Women and Medieval Epic: Gender, Genre and the Limits of Epic Masculinity in the latest issue of The Journal of Medieval Religious Cultures. Oh, and Stephanie wrote nice things about me over at WLoAD: the journal looks like it will be fabulous!

And so nice, you say them twice!

You sure have your spoons in lots of pots.

Patti, I got a head full of crazy stuff and stray knowledge. I'm doing my best to turn it all into stories. My plan is to empty my head, but somehow it keeps filling up again.