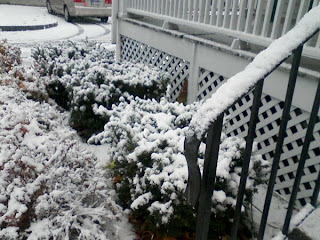 Well, the most unexpected thing yesterday was the snow that fell after the weather report suggested no more than the possibility of some light rain. My first reaction was disbelief, then dismay as it continued to fall. We finally accumulated over an inch and a quarter. There's something distressing about getting snow this early, though there's a part of my brain that says, well, maybe we're getting it out of the way early in the season though of course another part of my brain whispers, oh god, it's going to be a real long winter, isn't it?

Today is advisement day, which always fills me with misgivings. What advice can I offer? Don't do what I do? Life is easier if you conform, follow the rules and do what everyone tells you to do? Nah, I can't really advise that -- then again, all they really want to know is what classes to take next semester. I can do that. Well, with the help of my computer interface, I can do that.

The other unexpected thing came in the mail. Accustomed to getting rejections in the mail (acceptances usually come via email or phone), I experienced a sharp stab of disappointment to see a thin envelope from CIES in the mail yesterday.  But I opened it to find more encouraging news: 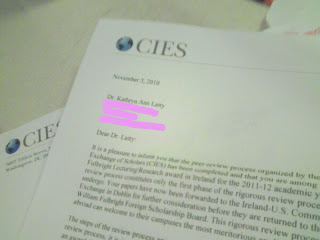 Namely that I've sailed over the first hurdle toward the Fulbright. That's something: not everything, but something. My file is now being sent over to Ireland to be considered along with the other finalists. How many finalists? Don't know. When will I know if I make the final cut? Somewhere between "March and May" although sometimes it can be beyond May, depending on, oh, a host of factors. You can be approved, not approved or held in reserve as an alternate. For the latter, you might have to wait until first stringers decide whether to take the opportunity. So more waiting. Trying not to think about it -- yet plan for the possibility of going abroad for an extended period of time. Or not.

"Only the first phase": I love the sentence, "Given the multi-phased review process, it is important that you do not take any irreversible action based on expectation of an award." In other words, don't tell your boss off, quit your job and sell your house. 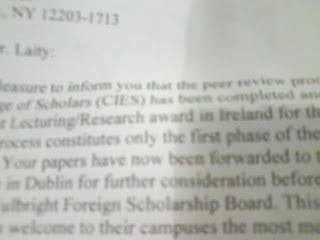 Two theatre outings to review soonish; a Moore essay sent off that should be appearing in Studies in Comics eventually, part of a themed issue from the Moore conference in Northampton last June.

UPDATE: It's Tuesday, so it's time for another entry in "La Ronde," the round robin story started by Patti Abbot. Check out  Evan Lewis' story.
Posted by C. Margery Kempe at 09:27

Congrats on the letter! And how nice of them to advise you not to act in a foolhardy manner.....

I can generally benefit from that advice.

Snow? I read the whole post but all I realy remember is the bit about the snow. SNOW? I'm so glad I"m several hours south, I'm nowhere near ready for snow. It was cold and windy yesterday and I wasn't prepared for that, either.

But hey, you jumped the first hurdle! That's something :)

Your sunny southern shores protect you ;-)

Thanks -- the first hurdle is something to be celebrated, even if it's only making me more anxious.

Congrats! My husband had to turn down his second Fulbright (Hong KOng)It happens all the time although sometimes at the last minute. 65 degrees in Detroit.

LOL -- it's supposed to get back into the 50s by the end of the week, and most all the snow has melted. Yeah, as I was saying over lunch today, I don't care if I'm the LAST one in line as long as they ask me.

What do the call the lowest/last in GPA/rating among the post grads? Well, the bitter drop out, but the graduated ones get to snap about being addressed by more generic honorifics. I don't know how I missed this post yesterday, but I did...belated congratulations on round one...I suspect, Good Doctor, that you'll carry the day and be watching the precip on the Emerald Isle in due course.

And, of course, the funniest thing about IT'S ALWAYS SUNNY IN PHILADELPHIA is its title.

My friend Elena adores that show, but I found it painful. She loves the Louis CK show as well and had me watch several episodes, which did not endear it to me either. I have entirely singular tastes in comedy and there's not much that makes me laugh -- and incredibly stupid things that make me laugh very very hard.

And yes, you're right about honorifics: I always tell my students that graduate school does not require intelligence, only persistence.