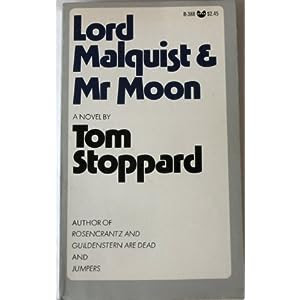 Although a bit late in the day (just got home this afternoon and had to spend some time soothing Kipper's complaints about being abandoned for a whole day and a half), I wanted to try to get back in the habit of writing up a "forgotten" book for Patti's round-up of titles.

"Let it be said of me that I was born appalled, lived disaffected, and died in the height of fashion."

Lord Malquist and Mr Moon is (to date) Tom Stoppard's only novel. Of course he's one of the most celebrated playwrights in the world, but this novel seems to often be forgotten in discussions of his work. Not quite out of print (there's a trade paperback edition from Grove that came out about five years ago), it's seems to have a very low profile. The novel came out in 1966 just before Rosencrantz & Guildenstern are Dead and Stoppard's first real success, although he had been writing short dramatic works for both stage and radio (the collection of his radio plays appears to actually be out of print and is also a wonderful book to pick up).

In this novel, the Czech-born British knight (by way of Singapore and India) indulges in some of the same obsessions that fill his plays -- peculiarities of class and station, misunderstandings, confusions, sexual entanglements, surreal slapstick humor and an actual ticking bomb. It's by turns hilarious and insightful and always brilliantly timed. So I'm just going to give a few random quotes to give you the flavor of the story that mixes up the would-be Boswell Mr Moon and the haughty noble (as well as his wife, a cowboy, a lion and more):

"I find crowds extraordinarily lacking," said the ninth earl. "Taken as a whole they have no sense of form or colour. I long to impose some aesthetic discipline on them, rearrange them into art. It would give a point to their existence."

It was all a question of preparing one's material. There was no point in beginning to write before one's material had been prepared. Moon, who had experimented on a number of variations of a first sentence, felt this quite strongly. He found that the vastness of his chosen field reassuring rather than daunting but it did cramp his style; he could not put down a word without suspecting that it might be the wrong one and that if he held back for another day the intermediate experience would provide the right one. There was no end to that, and Moon fearfully glimpsed himself as a pure writer who after a lifetime of absolutely no output whatever, would prepare on his deathbed the single sentence that was the distillation of everything he had saved up, and die before he was able to utter it.

"I got dizzy," he explained.
"I should think you did -- what were you doing?"
"Nothing," said Moon. "I was trying to face one way or the other and I got confused and fell over."
Let that be my epitaph.

For Style is an aesthetic, inbred and disengaged, and in such precarious times these are virtues. We all have an enormous capacity for inflicting harm, and hereto the only moral issue has been the choice of the most deserving recipient..."

"You see, he understood that substance is ephemeral, but style is eternal."

"Be poetic, dear boy, be poetic and take your text from d'Aurevilley -- La verité m'ennuie."

"Idealism is the thin edge of madness -- console yourself, dear boy, with the thought that if life is the pursuit of perfection then imperfection is the nature of life."

As in his plays, Stoppard enjoys creating characters whose opinions oppose diametrically and then setting them at each other. The hapless Moon manages to be both pathetic and hopeful, the imperious earl both infuriating and amusing. Sex has its allure but always seems just out of reach. The randomness of life (as deliberately arranged by the writer) creates mad moments of black humor. I'd love to see Stoppard write another novel, but he seems happy with plays (not that I mind). Nonetheless, it would be fun.
Posted by C. Margery Kempe at 17:28

Have spent many enjoyable hours in the theater with his work but not read this novel. Thanks!

It's well worth it -- as are the radio plays. A lot of fun to be had and always good thinky stuff, too.

I, too, have admired the drama, but was unaware of the novel...and as a fan of audio drama, shall seek out that book, as well. Huh. Sex (of the near-perfect sort), like the (near-)perfect sentence, is just common enough to keep all us poor bastards looking for it yet again...