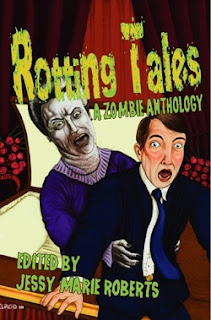 I'm pleased to let you know that the zombie anthology, Rotting Tales, is now available from Pill Hill Press and it features my short story "High Plains Lazarus" -- obviously influenced by spaghetti Westerns as well as Joe R. Lansdale his own self, but with a mystical twist.

The book will be available on Amazon soon, but until Thanksgiving, Pill Hill will be selling the collection for a discounted rate of $15.49 so if you're thinking of picking it up, that's a great reason.

The story has a funny history, having been written at the last minute as I headed off to Trinoc-con one year and hated everything I'd ever written (it happens) and so started writing something just for fun. It was a big hit, with one exception: I'd only got half the story written. People were ready to kill me for stopping in the middle, but that's all I had. I finished (and read the rest the following year at Trinoc-con) and sold it to an anthology, who then proceeded to slowly reel out the days while contributors waited, and waited, and were reassured that it was coming, it was coming -- and then after two years, they just stopped responding. Sigh. Unfortunately, that's the life of small publishers. I'm glad it's got a home at last. 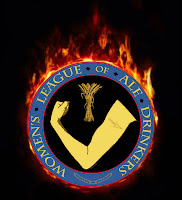 Over at the Women's League of Ale Drinkers, where the first issue of the journal is available for a mere 99¢ (such a bargain!), you can get the lowdown this week on our design director, Stephanie Johnson AKA the Queen of Everything, editor Vicky Squid and, er, me. We'll be getting to know many of the contributors to the first issue throughout the month. Enjoy!

Congratulations! I have my copy of the ALE DRINKERS inaugural issue and hope to read it through soon.

Whoo hoo! Well, let us know what you think -- or even consider writing it up somewhere...

And you can't cure THAT problem with a well placed head shot.
Alas both are required in order to get our zombie dreams to the reading public.
Of course if a glut on the zombie market develops, perhaps THEY will wish someone to administer that headshot.
Congratulations on the publication of your yarn. You (and the tale) deserve it. :-)

Thanks so much, Jack! You are too kind. And yes, we need to make sure everyone knows to AIM FOR THE HEAD! I had fun putting zombies in the past where not only the techniques of battles were unknown, but news about zombies had little chance of getting around.

Secret: this story is itching to be a novel...

The telegraph operator can't quite believe what's coming over the wire...

No, Jack, you need non-undead, at least from the neck up, editors to get the materials out...and quick, not dead, publishers.

Not to mention reliable copy editors!