Happy Birthday, Alan Moore, who doesn't use the intarwubs, so he'll never see this, but he'll know somehow ;-)

Here's my column for the day which risks disrupting the space/time continuum by discussing French literary theory with a popular audience:


Welcome to the Panopticon!

How an 18th century social theorist foresaw the wretched state in which we find ourselves today.
Your every keystroke on the computer is recorded; CCTV follows your progress around the city; you agree to changes without a second thought—or a second read of the license—every time iTunes wants to update, and you squeeze your toiletries into 100ml or 3oz containers in order to board that flight.

And you don't even complain any more.

Welcome to the panopticon. Back in the 18th century, Jeremy Bentham (yes, the man whose dead body still sits in a cabinet of the University College London—sans head—except for the occasional College Council vote) proposed a prison that was a model of efficiency. The watched cannot see the watchers but know they can be under observation at all times. You don't really need to have that many jailers because a few can keep the paranoia at peak.
Read more: http://culture.bitchbuzz.com/welcome-to-the-panopticon.html#ixzz15eLFmW33
Yes, a big part of this grows out of the TSA nonsense and the rather gratifying pushback against it. Lazier security does not mean better security: it just means it's easier to implement. But that's how it works: by wearing people down from their resistance. Don't accept it.
Well, my Xmas cactus apparently decided to get a jump on the season already (I think it might actually be a Diwali cactus). I remain a Grinch. But I am amazed at how much it has grown from that little clipping. 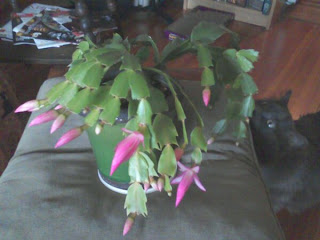