My most prized memento from the Conference on Medievalism: Terry Jones' signature on my copy of Erik the Viking: the Director's Son's Cut. Mr. Jones was so very nice and amusing (calling Machiavelli "a very naughty boy indeed" or pointing out that Richard II is so unpopular that he discovered that searching for hits on Google gets the immediate result, "Did you mean Richard III?") and generous with his time (medievalists, after all being the second geekiest bunch there is) when we all buzzed endlessly about him, begging for autographs. 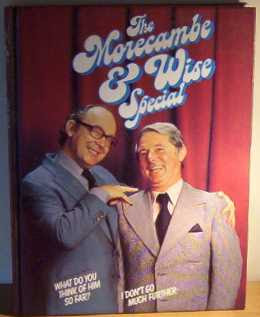 Of course the other find of the conference at a local used book store made me happy, too. Nothing like finding obscure (well, in the States) British comedy duo books from the seventies. Even in Britain this is not a real easy book to stumble across. It's full of exactly the kind of silliness you'd expect from Eric and Ern. If you don't know them, you might want to start with their version of "Singin' in the Rain."
Posted by C. Margery Kempe at 11:50

Cool! I watched that show a lot, too! They were terribly silly guys! :-)

Hey, I'm glad you two know them! So few people 'round here know all these British comedians (especially from the past). Have you see this one?