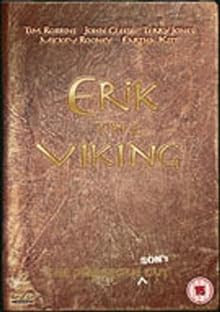 Okay, I should be starting with how cool it was to meet Terry Jones, but really, I have to start with how cool the city bus driver was.

When he picked us all up at the campus after the plenary and reception tonight (along with a whole lot of students), he hadn't seen the free passes we were given for the city buses, but he shrugged and waved us onboard. We kept nervously looking around for landmarks and asked how close the bus came to the hotel (since it was the 2C and not the usual 2), so he said not to worry, he'd drop us off. Three blocks further than he was supposed to go. Clearly, he was heading off duty, too.

But oh yeah, Terry Jones was cool, too. Taller than I thought -- I guess standing next to John Cleese all the time makes you look shorter. Dressed in black (like any sensible person) he was very affable, friendly, signed things for everybody when he could have been drinking wine (well, people felt bad and got him wine). He was so busy setting up his computer for the talk at first, like any academic (the computer? a Powerbook G4 of course -- 15" screen), and hooray! knows how to use Powerpoint effectively [I was almost driven mad by the security presentation in the Arts & Humanity meeting because they never went into the slideshow -- argh!]. As expected he was entertaining and amusing as well as informative on reconsidering Richard II.

So yes, I got him to sign my new copy of Erik the Viking (the director's son's cut) so I can show it to my students next week. I also gave him my Sharpie, so hey -- he has something of mine. It was an exchange ;-) Well, he was busy signing many things and what works better than a Sharpie? I was happy to contribute.

The conference ends up being full of people I know at least slightly. The medieval world is large, but the medievalism world is a bit smaller -- and I met someone in the Albany area, so that's cool, too!
Posted by C. Margery Kempe at 19:49