Elvis has left the Diner

And later this morning, Yvonne will be leaving Albany. Her talk went well last night, although she was fighting a bad cold. We had a pretty good turnout for a Friday night, Fridays in general at St. Rose "looking like a ghost town." She played a little on her flute which is modeled on the early flutes, which were wooden not metal. 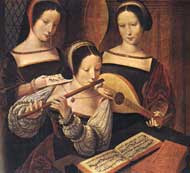 It sounds lovely too -- warmer than a modern flute but with much the same tone. A good number of my students were there (and my dean and department chair -- eek!) as well as some folks from outside the college, which was nice. Hildegard still remains a magnetic personality. The apparent non-students were the ones who asked most of the questions -- my students were too shy, it seems.

Afterward we went out for a late bite at the Gateway Diner. Albany is the land of diners and bowling alleys, so I feel like we have moved to Lebowski-Land. Of course our first eye-catching sight as we walked into the diner was the guy in the back, at a table of about a dozen guys, who looked like an Elvis impersonator. Or if he wasn't he should look into the possibility, because it would be a shame to waste that rug and sideburns.

In case you are wondering which Lebowski character I am:

According to the "Which Big Lebowski character are you?" quiz: 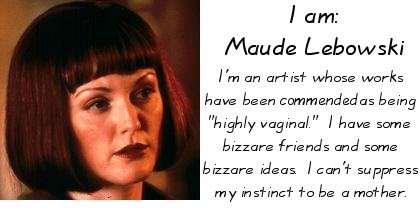 Why don't you check it out? Or we cut off your Johnson!

According to the "Which Big Lebowski character are you?" quiz:

I am...
Jeff Lebowski

But nobody calls me that...the call me The Dude, or His Dudeness, or El Duderino if they're not into the whole brevity thing. I'm probably laid back and might enjoy getting high. I also like to bowl and I like the people around me to "take it easy, man."

Hee hee -- I should have guessed! Well, take it easy, Dude, and abide.

And the other one you sent along, my Edward Gorey death is apparently:

"F is for Fanny Sucked Dry by a Leech"
You will be sucked dry by a leech. I'd stay away from swimming holes, and stick to good old cement. Even if it does hurt like hell when your toe scrapes the bottom.

I am also Maude Lebowski, and I made a point to not choose the sex answers! it's fixed, I tell ya....

And I'm also Fanny, sucked dry by a leech....who, with any luck, got drunk from the experience....