Six Sentence Sunday: It's a Curse 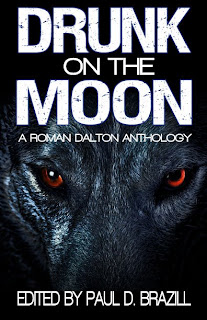 Howling out of Dark Valentine Press later this month, "It's a Curse" is one of the Roman Dalton stories in Drunk on the Moon, tales of the werewolf detective created by Paul D. Brazill. Mr B has lured me into the crime world much like a stranger with candy. I may be some time.

This is another story I can blame on The Fall, forsooth, by gad, verily! The opening owes as much also to Kingsley Amis, who set the bar high for hangover scenes in his classic of academic ambivalence, Lucky Jim. What can I say? I'm competitive.

I could feel my eyeballs roll in their sockets before I opened my lids: never a good sign. I steeled myself for the brutal fact of daylight, but the dawn was as grey as if it hadn't yet decided to get dressed. I reached for the crumpled pack of gaspers lying next to the bed. The object my groping fingers found puzzled me.


I opened one eye warily. It was a handkerchief, floral and trimmed in lace...

Great opening to a beaut of a story.

Aw cheers, Mr B. Thanks for inviting me to play with your wolf :-) I had a grand time.

love this...but the dawn was as grey as if it hadn't yet decided to get dressed.

Thank you, Christine. I sure had a lot of fun writing this.

Very nice intro. I love the discovery of the handkerchief and the immediate sense of dread it stirs. Quite engaging!

Wow! Great six, and so in keeping with the character. :-)