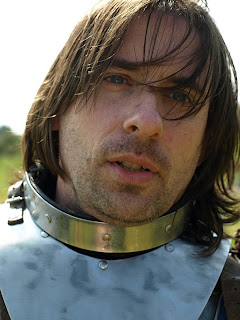 I'm kicking off a new feature today: Writer Wednesday. So many of my colleagues have been kind enough to feature me on their blogs, I'm well overdue for returning the favour. First up is my fellow Trestle Press author, Michel R. Vaillancourt.

Tell us a little bit about yourself, Michel.

In brief about me, I am forty-two years old, currently living in Charlottetown, Prince Edward Island, Canada.  My day job is CEO & Alpha-Geek for a video conference hosting company.  I’m married, I have a son and I have been reading and writing for most of my life.  I have been involved in Steampunk for two years and a fan of adventure stories since I was twelve.

Q: What do you write on? Computer, pad o' paper, battered Underwood?

I'm a story teller, in terms of mindset.  So for me, the challenge is keeping myself "surrounded by the magic" that story telling brings me in front of a spoken-word audience.  Distractions that remind me that it's "just me here" are my bane.  So, I tend to write with most of the lights off, at my computer, using a full-screen won't-let-you-format-or-spell-check application called OmmWriter.


The lights are out, because that "shrinks the world" the way that being on a stage or at a campfire does.  I can't see my audience, I just have to trust they are there.  I use a computer because my thoughts tumble out of my fingers, and I can't hand-write fast enough to keep up, and for some reason dictation never works for me.  OmmWriter gives me a visual and auditory ambiance that washes away the rest of the house noises, the sound of the five cats, four birds and a dog, etc, and allows me to emotionally drill into the scene I am trying to capture.

Q: Do you listen to music while you write? Does it influence what you write?

Absolutely, I do.  My listening music tends to be based on my mood.  Sometimes, I just want quiet, or I pick one of the ambiance sequences that is part of OmmWriter.  I either listen to Steampunk music from groups like Abney Park, Vernian Process and Vagabond Opera, or I listen to trance/ electronica from Tiesto or Armin Van Burren.  Other times, I listen to atmospherics like Brian Eno's "Music For Airports" or "Music for Films".


A few times, I've used music to help me craft a scene...  for that I dig out movie sound tracks and find the right "feel" I am looking for.  Most of the time, though, the music is there to work as creative grease, not to actually be a direct influence.

Q: Do you write in short bursts or carve out long periods of time to work? Is it a habit or a vice?

I write when I have a story to tell.  I don't write because I "have" to because of an "external" influence, like a deadline or a screaming publisher.  I already have a job, so I have the luxury of writing my stories out because I feel like telling the next part of my story. How much I write at a session really depends on how much I have to say.  I write "until I'm done" and nothing more.  If that is 100 words, okay.  Some days it is 3200 words.  My wife knows that my story writing is a joy in my life, so when it is what I want to do, she encourages me and lets me go to it. That makes me very lucky on many fronts and I know that.

Q: What writer would you most want to read your work? What would you want to hear them say?


These days, it would Cherie M. Priest.  I'd love to have them publish a review of my work.  She's pretty much the benchmark for Steampunk writing these days, given the success of "Boneshaker".

Q: On the days where the writing doesn't go so well, what other art or career do you fantasize about pursuing instead?

Other way around for me.  On the days my IT business isn't going so well, I fantasize about doing well enough as an author to go full time pro with it.  I haven't had a "bad writing day" so far;  I'm fortunate that way.

Right now, not much.  I'm pretty busy, and I'm trying to stay focused on my own story world and my own story writing.  I'm a dreamer, so I get caught up really easily in other people's worlds.  So, until I get my second novel sealed and delivered, I'm keeping my reading pretty narrow.  Mostly period research and associated Steampunk-themed blogs. 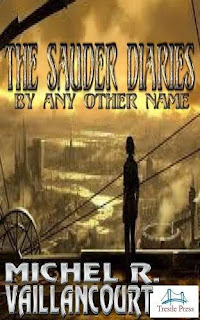 Q: Where did the idea for The Sauder Diaries: By Any Other Name come from? Do you have a surefire way of sparking inspiration?

The full explanation is on my blog site with a complaint, an argument and two pretty girls. The short version is that I wanted to answer the question "who are the sort of people that live in a world where airship pirates are possible?"  That's why the main character, Hans Sauder, starts off into the world of airship piracy with as little knowledge as the reader at the beginning of the book.  It is an exploratory work.

I added to that the idea that I wanted to write a really -strong- female character.  One that would really be very counter-culture to the Victorian ideals of womanhood.  One of the things that the Victorian Era served as was a kind of watershed for the Sufferage Movement.  To me, to be true to "Steampunk" as I see it, you pretty much need a female lead or supporting character to be ahead of the curve;  already be out there, doing the sort of things that women of the time rallying in the streets could only dream about.


As far as sparking inspiration, one of my favorite comments about the nature of human discovery is that "... more great moments in science have been heralded with the words 'that's funny...' than 'eureka!'."  So, when I want to tell a compelling story, I start with a compelling question and then figure out how to make the answer feel like "that's funny...";  a sense of discovery or disbelief that grows into wonder.

The Sauder Diaries: By Any Other Name

The Sauder Diaries take place in an alternate-history Earth, in the year 1888.  The Crimean War ended as a stalemate and Europe is divided along the Allied and Russian Imperial borders by the Scorchlands. Large sections of “civilized Europe” cannot be traveled due to bandits, renegade armies, and rogue mad science experiments.


Hans Sauder is the son of a German industrialist, on his way to University to study airship engineering. His passenger airship is attacked by the legendary pirate ship the Bloody Rose.  Hans is taken prisoner and given the choice of joining the crew, or taking his chances with parachuting into the wilds of Europe.


Thus begins the “diaries”, detailing his travels — the reader is first treated to Hans' impressions of events and then gets to see what really happened.


Hans and his new crewmates are hunted by the airship navies of Allied Europe, chased into hiding in Egypt, board merchant ships over Germany, and visit hidden black market trade centers.  Things really get rough when they are hired to undertake a dangerous mission in the skies of the Russian Empire.


As the story unfolds, Hans' new life is further complicated by the romantic advances of the leader of the ship's gunner-marines, a ruthless and no-nonsense woman with a chip on her shoulder.  As well, Hans is perpetually dogged by a deep conflict between his sense of morals and duty to his family, and the challenges and adventure of this new life he has discovered.

He had made remarkable friends, found an improbable love, fought, killed, saved lives, wept and laughed all over a half-a-mile in the sky for three remarkable months.  He knew what it was he had been missing his entire life.

“But I cannot stay,” he said quietly to himself.

Michel can be found at his website, on Twitter and Facebook as well as Amazon and Goodreads. Look for him on the Steampunk Writers Ning, too.