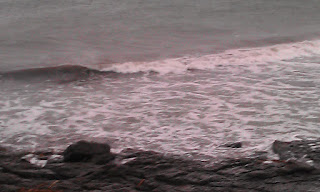 Miss Wendy and I tried to do the overnight B&B trip to Inishmore. We got up early Tuesday to go get our tickets for the ferry and make arrangements. The woman at the ticket office said the crew were making a decision at 9. They decided not to go that day.

More timid folk would have decided then and there not to make a crossing in January.

Miss Wendy and I, however, were determined, so we went back yesterday and sure enough, the ferry would be sailing so we got our bus & ferry tickets, but decided not to do the whole B&B thing, which ended up being just as well. Remote islands in the Atlantic in January, it turns out, do not offer experiences conducive to relaxed enjoyment. Imagine our surprise. 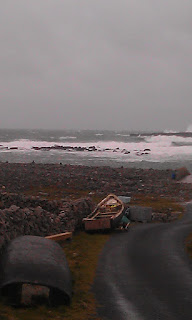 We found ourselves back in Connemara on the bus, which took a bit longer than we had anticipated to get to the ferry terminal. Miss Wendy, as you know, used to work at the Coast Guard Academy and has been on whaling trips and whatnot. My family used to have its own boat and I've been on ocean ferries before.

I have never been in water that wild! Miss Wendy said she understood now why Poseidon was the patron of horses as well as the sea as we plunged up and down in the waves. Arm rests have other uses than just resting arms, I discovered. I was trying not to think of things like The Poseidon Adventure and just roll with the waves. Even as I write this, I feel that strange sensation again. I didn't feel ill at all, just nervous.

It didn't help that all the islanders we met that day said, "Rough crossing?" and then proceeded to regale us with their own decisions not to take the ferry that week. The woman in the stone shop showed off her arm brace and said how she was supposed to go to her doctor on the mainland, "But I'll leave it until next week."

Our tour around the island brought us to seals (which I don't think either of us could make out) and lots of sea birds, which Miss Wendy found in her guide book. The ruins of the 8th century monastery and its cemetery were quite lovely and picturesque, living history. 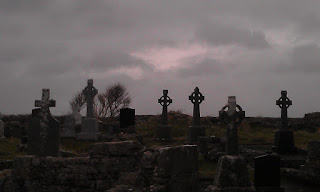 The beauties of Dun Aengus were considerable but there was a bit of a problem; as the woman in the heritage office told us, "Be careful by the cliffs." What she might have said was, "The opening to the ring fort creates a kind of wind tunnel that combined with gale force wind will knock you off your feet." We discovered that for ourselves. Some dramatic footage of the cliffs.


The cafe where we warmed up before the hike up to the fort gave a lovely warm glow from the turf fire and the delicious food. The pub at the end of the tour proved a welcome sight as we tried to steel our resolve for the journey back. By the time we walked to the pier, the wind howled and the rain assaulted us. We got on board, but they warned us they were changing us to another boat. After about a quarter of an hour, we all decamped for the smaller, less swank ferry.

A few people had told us the journey back would be better, but coincidences added to our nerves. In the pub the telly showed a Raging Nature program on people dying in blizzards detailing how it feels to freeze to death and the woman sitting across the aisle from Wendy read a novel Dead Tomorrow! or something like that. I think we both blanched when one of the sailors, after staring out the fore window for a time intently, reached up to the row of life jackets hanging on a shelf above our heads. However, he was just retrieving his newspaper which he'd put up there. So we plunged on through the sea in the dark this time, rolling and pitching, rising to meet the waves and it was a bit better but still nerve-wracking, so we were glad to reach shore.

You can see all the Inishmore pictures at the end of the Ireland album. I think we're going to treat ourselves to a spa day today. I expect I may be back to visit the Aran Islands.

Critters Poll: still time to vote for me for best horror short, or as part of the Dark Pages: International Noir anthology; you can also vote for the lovely QoE's artwork as cover artist.
Posted by K. A. Laity at 07:37

Great report. Will share it on the Aran Islands facebook page.
If you could please insert a link in the post to the main Aran website at http://www.aranisland.info thar would be great.
Thanks.
John.

Thanks! I'll change that link. Glad you enjoyed.

Thanks so much. Our blog invites guest writers if you would ever like to contribute.
John.
www.aranisland.info/wordpress

Excellent! I'd be delighted.