BitchBuzz: Why the Blackout Mattered 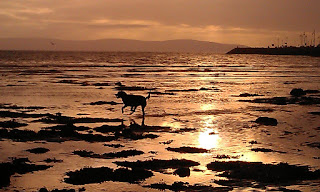 An unusual day: me away from the net. Be honest -- you didn't really notice I was gone, did you? It's all right. I know occasionally I should take a break from yammering across all media. Besides, I took some more lovely photographs over in Salthill. Nothing jazzes up a photo like a happy, bouncing Lab.

I also managed to finish a story and send it off to my editor: it was meant to be 5K but ended up closer to 8K. Also not like me: if you get paid the same, why go over the target? Well, sometimes the story demands it. Characters can be so pushy. Thinking about tonight's Over the Edge reading, I also thought I should have something on hand to read in case I can get on the list, so I finally started writing the new novel. Yes, about time after thinking about it for so long. It reminded me that the best way to edit your writing is to read it out loud. I know that, but I seem to always forget it. You may ask, how's that academic essay coming along? [cough] Today for sure! Here: go read Peter Cook's Jekyll and Hyde script and stop hassling me.

Better yet, go read the column, featuring a rudely hilarious animated GIF from The Oatmeal:


Why the Blackout Mattered

After some speculation about whether they would take part, it was telling that Google applied the now familiar black censorship bar over their corporate logo (in the U.S. anyway—Google.ie continued in normal mode). More obvious homes of net freedom like Boing-Boing, Reddit, Wikipedia and Wordpress likewise blacked out for the day, but the participation of Google confirmed the broadening opinion that even for a mega-global outfit like Google SOPA and PIPA continue to be very bad ideas.

The so-called "Stop Online Piracy Act" and the "Protect IP Act" would radically affect everyone who uses the net, by making a criminal of anyone who links to anything deemed to be copyrighted material as explained by the always insightful Stephen Colbert. Why catch criminals when you can make everyone a criminal? Anyone who thinks that of course the laws won't be abused this way by corporations should follow the horrifying saga of how the Recording Industry Association of American (RIAA) and the Motion Picture Association of America (MPAA) have already invoked draconian measures against anyone they can catch—apparently because they're frustrated with not being able to catch real criminals.

People who do not understand the internet should not be legislating for its control; the sad fact is they allow corporations like the RIAA and MPAA to do it for them. While many people will support measures to stop internet piracy, those who do not comprehend how these poorly written measures will forever change the net need to know that Facebook, Twitter and all the rest will be as dead as Napster should SOPA or PIPA pass...


Read the rest at BBHQ. And hey, call your representatives and remind them they represent you and not multimillionaire corporations: fight the real enemy.
Posted by K. A. Laity at 07:08