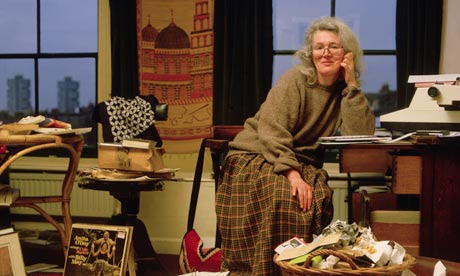 Angela Carter: she's been a kind of spiritual mother to me since I first read The Bloody Chamber and knew I'd found a kindred soul. This week I finally started writing the novel that's been brewing in my head for some time now inspired by Carter and to some extent also by Kingsley Amis. Hard to imagine two writers more diametrically opposed, but there it is. They fit together in this project. So my head snapped back a little to see this story in the Guardian about Carter's postcards to her friend and literary executor Susannah Clapp. All kinds of resonance from the details in that story from her love of sending postcards to other coincidences that make me wonder just how much of Carter's life will intertwine with my story. Maybe it will only be at the start. Owl Stretching began the day I realised there would be no more sad, funny novels from Kurt Vonnegut, but his ghost only hung around now and then to remind me. He didn't really poke his nose into the proceedings much. Carter died far too soon (and about the age I am now). I feel a responsibility to write the kind of stories she might have written -- or at the very least, as fearlessly as she always sought to write. It's a goal. There's a slide show of the cards. Check it out.

I've got an interview up over at Ben Sobieck's blog, where he suggests I might really be a spy. It's funny how that theme keeps recurring: the first novel I ever wrote -- way back in high school -- followed the adventures of a wannabe spy. The title I'm sorry to say was Ace Spies Incorporated and the plot followed a similar path to just about every film from North by Northwest to The Man Who Knew Too Little with the innocent main character getting caught up with the real thing and quickly getting in over her head. The novel also featured thinly veiled versions of my teenage crushes, the Beatles (ah, that 70s resurgence of second wave Beatlemania). I don't think I have a copy of this anymore, although my old friend Carla might.

I finally saw Melancholia, but I'm not ready to write it up. Harrowing, I can say that much. Amazing, incredible visuals and powerful drama, yes -- but harrowing. And I start teaching Wednesday. Eek!
Posted by K. A. Laity at 07:00