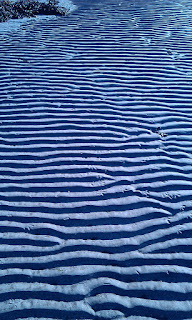 I meant to do a Friday Forgotten Book, but today took a few unexpected turns which involved a glorious day at the beach, a much overdue haircut and a shiny new iPad2 (thank you Fulbright Foundation) which is charging now. So I have added some lovely photos to the Ireland photo album, including a cute little Scottie dog (oddly enough, I'm working on a story that has one as a character). It's often difficult to get the corvids to sit still long enough -- or close enough -- to get a good picture, but rooks have been the best so far. Sitting in a tree on Claddagh Walk, one proved low enough to allow me to get a couple of shots that look all right. I keep trying to get the hooded crows and the magpies -- they're such fun to watch, but wisely wary of humans. Of course, in Galway there are always swans.

Low tide always has such interesting textures in the sand. I like the barnacles and seaweed exposed as the water recedes. Such a variety of textures. Makes for interesting pictures. And there's always my favourite spot. Sigh. It's so picturesque.

My column is up a bit later than usual: overdose on film coverage in the wake of the even more disappointing than usual choices. How the impact of a film like Melancholia could be overlooked seems a mystery. Oh wait, no it doesn't. It focuses on women and isn't a "chick flick" (horrid term).

As Bitch Magazine has already observed, the sky is blue, water is wet, and the Oscar nominations are a big feminist disappointment. This seems to be the year they officially become as irrelevant as the Grammys, an industry showcase that reflects no vision of reality outside the industrial boardrooms. In a year when awards can be offered for run-of-the-mill biopics that make horrid people "vulnerable" and "human" (one begins to suspect a subterranean right wing campaign funding both the films and the awards). At least the National Society of Film Critics and the jury at Cannes  picked up on it.

In the seemingly ever smaller number of films that pass the Bechdel Test, one major film got completely overlooked for the major awards: Lars von Trier's Melancholia. It's kind of stunning because it includes the sort of bravura acting that usually gets awards—had it been men in the roles, perhaps the statues would be lining up. Perhaps it was the uneasy accusations of misogyny leveled at von Trier particularly in the wake of Antichrist. But here's the thing: every female character does not have to be a squeaky clean role model or redeemed hooker. Male characters have the space to be good, bad or better yet, complicated. Women remain largely relegated to secondary roles in most films and to films dismissed as 'chick flicks' when they star in them.

Melancholia is no chick flick. It is harrowing in so many ways—not least for the unflinching portrayal of real depression...

Read the rest at BBHQ as always. I have more to say about Melancholia, I think. I've really only scratched the surface here: I want to talk about visualising the end of the world -- and the music, too. Anon -- always too much to do!

This seems to be the year they officially become as irrelevant as the Grammys, an industry showcase that reflects no vision of reality outside the industrial boardrooms.