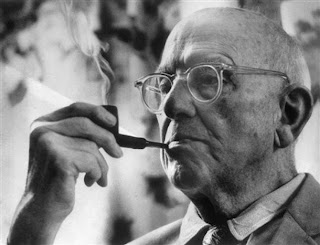 There's some kind of fundamental perversity in my nature that made me choose at the library this week a 5 CD unabridged set of Beckett's Malone Dies as well as P. G. Wodehouse's Young Men in Spats, but I'll leave you to sort out what that means.

Wodehouse's prose delights. A simple yet profound pleasure, one that most Americans in particular seem immune to -- a phenomenon I cannot comprehend. I suppose I can grasp there are those who dislike spending time with the (mostly) rich young things idling their time in (mostly) frivolous ways, as does Wodehouse's most well-known creation Bertie Wooster. More folks became enamored of them when Bertie and the inimitably shimmering Jeeves were brought to vivid life by Hugh Laurie and Stephen Fry (who seemed born to take the roles). But it's also true that Wodehouse has never received the acclaim more dour writers regularly do, because he makes everything seem so effortless. The key word there is seem: as Oscar Wilde could tell you, there's nothing that takes more effort than creating prose that feels effortless.

Wodehouse is a genius. While his topics may be nothing earth-shattering, his prose captures a crystalline brightness that seems impossible to replicate. It's so deft. So I will just share some of the delights from this volume detailing the exploits of some of the young men of "a little group of Eggs and Beans and Crumpets" who often regard women as a separate species:

"It saddened him, he tells me, when he opened his illustrated tabloid of a morning, to have to try to eat eggs and bacon while gazing at a photograph of Mae Belle McGinnis, taken when she was not looking her best because Mr. McGinnis had just settled some domestic dispute with the meat-axe."

"The foundation of the beverage manufactured by Mr. Silvers seemed to be neat vitriol, but, once you had got used to the top of your head going up and down like the lid of a kettle with boiling water in it, the effects were far from unpleasant."

"And on the morning of which I speak they had strolled into into the Thorpe and Widgery emporium to lay in a few little odds and ends, and there, putting in a bid for five pounds of streaky bacon, was a girl so lovely that they congealed in their tracks."

"The first intimation Barmy had that the binge was going to be run on lines other than those which he had anticipated was when a very stout Mother in a pink bonnet and a dress covered with bugles suddenly picked off a passing cyclist with a well-directed tomato, causing him to skid into a ditch, Upon which, all sixteen mothers laughed like fiends in hell, and it was plain that they considered the proceedings had now been formally opened."

"Already the barmaid's ears had begun to work loose at the roots as she pricked them up."

"Well, Freddie, as you know, has never been the dreamy meditative type. I would describe him as essentially the man of action. And he acted now as never before. He tells me he doubts if a chamois of the Alps, unless at the end of a most intensive spell of training, could have got down the stairs quicker than he did."

"He had studied Woman, and he knew that when Woman gets into a tight place her first act is to shovel the blame off on to the nearest male."

See the rest of the overlooked books at Patti Abbott's blog.
Posted by K. A. Laity at 06:15

One of my goals is to read all of P. G. Wodehouse's work. I've read them in bunches, but never from the first book he wrote until the last. I'm almost done reading all of Trollope so Wodehouse is in the on-deck circle.

Excellent! I have only in the last couple years begun to read Trollope -- what a delight! I can't believe I put it off so long, but what a lot to savour. Thanks for dropping by, George!

Great choice! I've read most of Wodehouse, the only exception being some of his early boys' school novels. He made writing look so easy, but he sweated over every sentence.

Two brief stories: My mother-in-law worked for a while at the IRS. When a payment check came across her desk signed by P. G. Wodehouse, she was so excited she talked about it for weeks.

And when my oldest daughter was in high school, she discovered that her English teacher had never heard of Wodehouse. She distrusted teachers ever since.

Two writers who knew how to laugh, even if they laughed in different ways (less different, though, than some would insist...THE GOONs and PYTHONs fit neatly between them).

I've enjoyed all the Wodehouse I've happened across over the decades, but only the Borders firesale had led me to finally buy some of the volumes, particularly at the urging of George and Richard Robinson, iirc. (Not that I needed to be urged to buy PGW, but that I should pick up these volumes, very well-built and suddenly cheap, particularly.)

Jerry -- your daughter is wise. Bad teachers are time thieves. And I would have been so excited to see PGW's signature, too! My mother used to be a telephone operator and once got to talk to Colonel Tom Parker (she's a big Elvis fan).

Todd -- you are right to listen to the urging of your friends.