Publication: It's a Curse 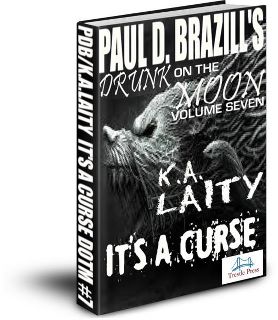 Whoohoo and hoooowwwwwwl! It has arrived. My contribution to Mr B's fine Trestle Press series Drunk on the Moon: IT'S A CURSE. Yes, of course of course, it takes its title from a song by The Fall and yes, there may be a few references to other Mark E. Smith lyrics in there.

You're shocked, I can tell.

Roman Dalton’s woken up in the wrong place again, but he can’t blame it on the moon this time. Finding himself in a tug-of-war between two lovely women might sound like he’s landed in clover, but one wants to ‘save’ him and the other—well, he’s got a feeling she’s a whole lot of trouble wrapped up in a designer gown. As far as our favourite werewolf PI’s concerned, IT’S A CURSE.

On Friday I had a chance to chat about it on the G-Zone with fellow Trestle Press writer Edith Maxwell. Mr B called in too and well -- to be honest, the two of us kind of hijacked the rest of the show, hee hee. You can listen to the whole thing from the archive. Great fun.

I've already made a trailer for it. Tell me what you think. And help spread the word! The page could use tagging, liking and of course, reviews! It's at B&N, too.