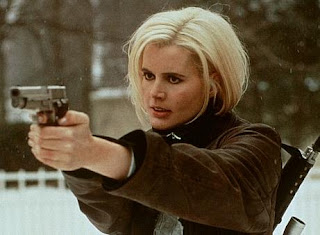 I got into a discussion on Twitter with Anne Billson about Finnish music and films, and we both lamented the lack of love in Hollywood for Renny Harlin when people like Ridley Scott continue to be trumpeted. I suppose I have a weakness for a Finnish director who always manages a little nod to his homeland in the midst of a blockbuster, whether it's a pirate ship flying the blue and white flag in Cutthroat Island or the Finlandia vodka prominently served in Deep Blue Sea. I find it hard to believe that I have not written about this film here before, but I searched the blog and turned up nothing, so let's assume it's true (yes, I did mention it in a column on holiday films for BitchBuzz).

I love this movie.

A lot of this is down to Geena Davis' winning performance as the amnesiac suburban mom who discovers she's really a lethal weapon. Davis has done a lot of work behind the scenes since then with the Geena Davis Institute on Gender in Media and while promoting the film she spoke about how her then-husband Harlin would balance the punishment she took on screen with therapeutic massage at night. She takes a beating in this film, but she's also warm and funny as well.

Samuel L. Jackson is great fun of course: Shane Black's script (written before repeating Lethal Weapon films sucked a lot of life out of him) sets him up as fairly hapless and yet always hopeful, though he can't get song lyrics right (heh!). Brian Cox is terrific (of course) in a small role and utters one of the funniest lines in the film (although the humour is due as much to his dry delivery as to the line). Craig Bierko makes for a fetching psychopath. David Morse and Patrick Malahide offer terrific performances as well in supporting roles. But this is Davis' star turn and she makes the most of it.

See the round-up of overlooked films, television and other audio-visuals over at Todd's blog. And if you haven't seen this film? Do. Look, it's really cheap. And it totally kicks ass.

Argh, I haven't seen that one. Must do so! Thanks for the reccy, Mr B.

Pity about Davis's career since. This is one of the best explosion films ever made. And certainly among the funniest.

I think she's devoting a lot of her time to the media center; not as visible but very important. And yeah, for big explody kind o' films, it's tops.

I absolutely love this film! Definitely deserves more attention than it has received.

Cheers, I agree! And you have a lovely site. I will have to rummage around it some more.

I have always meant to watch this. Not sure why I haven't. Funny, that.

It's great fun, I really do love it. Hope you like it,too, Patti. Let me know what you think.

Finally looked at the trailer, which tries to give away too much.

I guess I was mostly thinking about Davis being stuck in a series devised by my old high-schoolmate Rod Lurie, responsible for some of the most bootless films and series that have wasted good actors' time over the last decade or two.

Ah! Well, that may have been part of the reason she started the center.