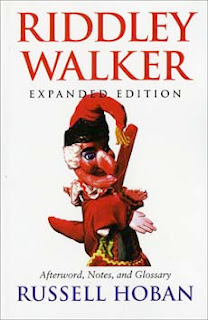 Russell Hoban was a singular writer; when asked what kind of a writing I do, I have generally offered up Hoban as the "genre" in which I write. Sadly, his name didn't always resonate with people -- and that includes NY Times obit writers; though most memorials mentioned Riddley Walker, too many seemed to be speaking of his masterpiece second hand. While many of Hoban's works deserve the accolade of 'masterpiece' this is the one that resonated most deeply for me. I read Riddley first in high school around the time I also read A Clockwork Orange: these books cemented my love of languages in a fictional context, though when I re-read Riddley as an adult, it was as if I had never read it before. Becoming a medievalist brought a further level of amazement, and visiting Canterbury Cathedral to see the St. Eustace painting was the ultimate pilgrimage for me.

Along with the art of "being friends with your head" Hoban's books taught me to trust in my muse and just write the stories I had to tell and trust that somewhere out there might be readers who would find resonance with them (and that they wouldn't do so if I didn't write them). Fans of Hoban might not be as numerous as those of more popular writers, but my experiences with the Kraken show me they are extraordinary and devoted.

My obsessions with storytelling and ritual feature here. The essay originally appeared in Puppetry International back in 2006, one of the first academic essays of mine to appear in a  non-academic publication that I nonetheless listed on my CV. At the time it seemed a bit radical (is it peer reviewed?!) however since then  I have continued my slide into publishing with abandon wherever my words might be of interest. No regrets there. I suppose I could blame tenure, but I only got that last year, so I suppose it's just my lax attitude. (>_<) I recommend picking up the issue of PI  if you have any interest in puppetry: fascinating publication. I think there's more I have to write about puppets, even more about Punch, but things leak out of my brain at their own pace.

Here's the opening: I've put the rest up on Scribd (restoring my original title which I prefer). Be sure to see Todd's round-up of this week's Forgotten Books (Pattii's taking a break for the holidays).

Although he sets his novel Riddley Walker (published in 1980) in a post-apocalyptic future, Russell Hoban makes use of the medieval world to mark this future as a site of the “primitive.” For this stunted society, the most apparent aspect of the Middle Ages is the explicitly medieval legend and wall painting of St. Eustace, which still exists faintly on the wall of Canterbury Cathedral. Perhaps more important is his appropriation of the medieval mystery plays, which illuminate bibilical narratives and are traditionally performed on mobile wagons. As performed in Riddley Walker, the “Eusa Show” (a garbled version of the St. Eustace story) takes on many of the mystery plays’ aspects, transmitting the truths of the culture and entertaining people with education. This modified Punch and Judy show conveys the only narrative that remains after the apocalyptic devastation of English society. The ritual of the puppet show picks up the religious meaning of the mystery plays, but it also takes on a social and governmental function that medieval dramas typically lacked. Just as various dissenters from Lollards to Pelagians threatened the orthodoxy of Christianity in the middle ages, the young protagonist’s discovery of a real Punch puppet sets off a chain of events that destroys the carefully scripted Eusa show. Hoban’s use of Punch history gives this superb novel its authority, while the familiar art of puppetry provides a vivid connection to this bizarre future world for the modern reader...
Posted by K. A. Laity at 07:00

The extent to which such historical materials also inform the earlier apocalyptic fiction of the likes of Walter Miller, Jr., Edgar Pangborn, and their editorial patron "Anthony Boucher" might make for fruitful exploration, as well...and probably has...sorry for your loss, Kate. As with a select number of other writers, what gifts he brought to us by example as well as in the work...

Gene was alwways very fond of Miller's A Canticle for Liebowitz which I admired but found rather cold and intellectual without ever being affecting. Beyond the usual cultural evocations of the Middle Ages as the "dark ages" there are a lot of interesting imaginings of the time with and without apocalypse.

I think you'd find Pangborn, and his DAVY, far less cold. His sister, Mary Pangborn, was also a notable but even less prolific writer.