Todd, of course, shows up here frequently whether as a fellow participant and sometime host of Friday's Forgotten Books and the host of Tuesday's Overlooked A/V or just as one of the regular kibitzers. He's on the left in this picture from a family wedding. 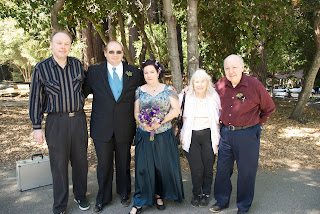 Pat/skritch the dominant, female cat in the house, Niki, who has probably awakened me so I can pat her and then feed the entire trio of household cats.

Some of the music I've actually danced to: THE MAIDEN IN THE TOWER performed by the Brubeck Quartet (a ballet suite that Brubeck didn't complete, but on the album COUNTDOWN the quartet recorded four pieces DB had finished); "She Said Yeah" as recorded by the Rolling Stones; "She's Not There" by the Zombies (introduced a party full of fellow high-schoolers, including eventual pro musician Deb Fox, to them at that time); THE FREEDOM NOW SUITE by Max Roach, et al.; Jawbox’s “Twister” and The Specials’ “Ghost Town.”

A house in Collingswood, NJ, though I also rent an apartment in Media, PA...but entirely too much time is spent in a gray cubicle in Radnor, PA.

6. If you were offered an all expenses paid trip anywhere in the world, where would you go?

Tough call. I so rarely enjoy travel, having had entirely too much of the bad sort in my youth. There are all sorts of places I'd be interested in seeing, but getting there is less than half the fun. If it isn't a round-the-world journey, with many destinations (with rest breaks between), I'd be torn between, say, Italy and Australia, Guyana and Japan...

I've spent several years citing those weekly, but among the very best ones are THE EXILE by William Kotzwinkle, LIVING MY LIFE by Emma Goldman, CONJURE WIFE by Fritz Leiber, THE FEMALE MAN by Joanna Russ, THE ENQUIRIES OF DR. ESZTERHAZY by Avram Davidson, THE ALEPH AND OTHER STORIES, 1933-1969 by Jorge Luis Borges, GOING OUT OF OUR MINDS by Sonia Johnson, TROPHIES AND DEAD THINGS by Marcia Muller. Dozens of others.

In reverse chronological order, among those I recall causing some tears to well: SHAME (the Bergman sf film); PONETTE (who doesn't love a good setpiece of an recently-orphaned child of about six being tormented for her status by schoolmates?); PATHS OF GLORY (with the laughter); THE 400 BLOWS; SNOOPY COME HOME; "The Last of the Curlews" (the first ABC AFTERSCHOOL SPECIAL...they were trying, then).

Unexpected jokes, and well-executed expected ones. Humor that is not about others getting hurt (chided is OK).

David Campton's "At the Bottom of the Garden" convinced me at a young age to have them ruthlessly extirpated.

Terrifying imagery, at least at the left side.