What is more awesome than awesome? It has to be the lovely Chloë! She sent me absinthe chocolates. That would already make her more awesome than awesome, but she's also hilarious and has adorable Maudie to help with the awesomeness, too. We finally got to meet in Derby this year at Alt.Fiction after having lots of laughs on line. Not surprisingly, we had lots of laughs in person too. How awesome is that? Very awesome! Like Chloë. Here she is with a ladybird hat & Mr Y. 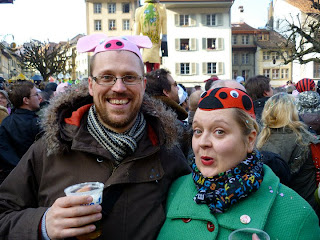 Think "oh fuck, not this again" and then get a kick in the head from Maud the dog who objects to me being compos mentis as it generally involves me moving and disturbing her.

I could probably be persuaded to dance to anything because I’m easily led, let's get that clear early on – and I’m especially easy once I've had a few, ahem, blackcurrant cordials. I have a fond memory of dancing in a student night club to "I Touch Myself" by the Divinyls and putting the fear of god into the tiny student girls and boys (I was a “mature” student) with my earthy hip movements … Nowt better than scaring the children.

Fribourg, Switzerland. It’s the city that all the other Swiss cities look down on. And they shouldn’t because Fribourg is shiny. As long as you don’t mind life at a molasses slow pace and occasionally being bored titless.

Unexpected nights out - ones that are organised last minute or when you think to yourself, "This is going to be average, so I'll just have a couple and then get an early night" only to wind up crawling home, full of Jägermeister or some other deadly concoction at three in the morning. Which makes me sound like a lush ... okay, I confess. In truth, the best nights are the ones where you can relax and talk to the people around you and not feel awkward. That’s all I really ask.

Me, Mr Y and a paddle. Not that kind of paddle either. Ain’t no creeks round here.

6. If you were offered an all expenses paid trip anywhere in the world, where would you go?

India. It has been a constant desire since I was about 6 years old. I want to see as many Ganeshas as I possibly can, see the full moon light up the Taj Mahal, breathe in the air of the Himalayas, sink my toes into a beach in Kerala, launch a lamp onto the Ganges at dusk for my Grandfather, and to witness New Delhi – amongst a catalogue of other things. I also have a hankering to see Canada (and to meet Isa and catch up with my pal Shelley) and to see the Aurora Borealis in Iceland (especially now as they should be at a peak for the next year or two). Can I have one of those round-the-world-many-stop-ticket thingies please? [Ed: yes, and me too so I can go as well.]

Vegan Freak: Being Vegan in a Non-Vegan World by Bob and Jenna Torres.

Oh lordy, I am a sap when it comes to movies. In real life, I’m not much of a crier, but the movies can manipulate the crapola outta me and I’ll fall for it every time. I’ve never seen all of ET, just can’t do it, can’t even watch clips of it. Out of Africa nearly killed three generations of the women in my family when I watched it with my mum and grandmother. And then there was Reservoir Dogs. I had an immense crush on Harvey Keitel for a very long time and I thought he was beautiful when he was trying to keep Mr Orange alive. I bawled like a baby and everyone looked at me like I was crazy. They may have had a point.

Odd things. Mr Y can make me laugh like a donkey – he’s got a mainline to my funny bone and I couldn’t even explain why most of the time. I love Mighty Boosh and The IT Crowd, and a cornucopia of other tv stuff, but I have to confess to a penchant for Jackass. I know it’s wrong on so many levels but watching a man snort wasabi and then retching inexplicably tickles my funny bone. I can’t lie to you; I’m clearly a base and desolate creature.

I used to talk to the ones at the bottom of the garden of the house where I grew up. I had my own little plot at the back of the shed where all I grew was a climbing white rose because that was all they wanted. I spent many happy hours there.

'… Nowt better than scaring the children.' There, but for an extra 'r', goes the story of my life.

At least you are doing your part, Mr B. Scars make a person interesting after all (says the woman with the four inch scar around her neck).