Okay, what're the odds? Oh sure, it is entirely likely that I would get on with the first medievalist I met at NUI Galway. After all, we medievalists have to stick together like all endangered species. But we keep finding amazing things in common like our birthdays (!) and P. G. Wodehouse and the Marx Bros and Tony Hancock. Destiny took a hand in things, I think, when it sent me to Galway. She even invited me to talk to her Old English course so I wouldn't forget entirely what the inside of a classroom looked like. Here's the lovely Frances, award winning lecturer. 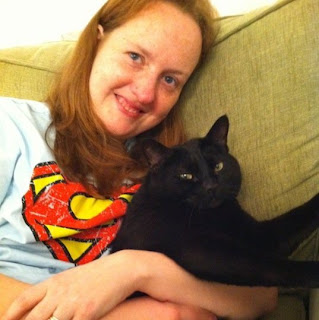 Let the cats in for a cuddle and go back to sleep, even if only for two minutes. I'm not a fan of sleeping late, but I do like to wake up slowly.

I'm a trained dancer, but the best songs are those that make me dance like I don't know how! "Come on Eileen," by Dexy's Midnight Runners, has made me jump up and down on ever since I was a bairn in 1982. I remember the first time I heard it: I jumped around the breakfast table with such enthusiasm and abandon that my mum cried with laughter. "Late in the Evening" by Paul Simon makes me do what my husband calls "Muppet Dancing", and it works best when I'm in the passenger seat of the car (although God knows what the people looking in their rear-view mirrors at me are thinking)!

In books. I much prefer stories to real life!

Learning languages, or doing something craftsy. I like to be busy!

6. If you were offered an all expenses paid trip anywhere in the world,where would you go?

Japan, Japan, Japan...or New York! But unfortunately, as I don't really like 'out', traveling is not the easiest thing for me to do!

The one with the boy with the orange pyjamas...but I can't remember what book it was. I vaguely remember reading it in bed--there was a boy who may have been an orphan; someone (it may have been a man) took him in, and a woman (whose name may have begun with a J) brought him pyjamas in which to sleep. The pyjamas either had oranges on them or orange buttons, and the boy had an aversion to the colour orange, so he slept in his clothes and then crinkled the pyjamas the next morning to make it look like they'd been slept in. I can't remember whether I actually read this book or DREAMT that I had read this book so if it sounds familiar to you, let me know what on earth it is!

I don't cry at movies...but Graham Greene's books always have me in tears!

At the moment, Diary of a Wimpy Kid. But everything in general...I'm a giggler! [Ed: I can attest to this.] Ooh yes, and games where you substitute the word 'goose' for either a noun or a verb in a film title. That one makes me chuckle too!

Yes! There's actually a special fairy garden in my garden, where the dead trees are and the primrose grows. I don't like to visit it very often, because it's also where the septic tank lives, but the fairies don't seem to mind.