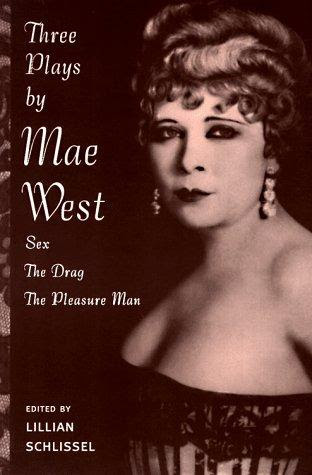 You think you know Mae West, don't you? The slightly risqué performer with the voluptuous curves: who asked Cary Grant to come up and see her, told Beulah to peel her a grape? What you may not know is how much she cleaned up her act for the movies. Three Plays includes Sex, The Drag and The Pleasure Man. West's plays are hilarious, full of street cant and scorching satires on the sexual and gender mores of her time. The first of the three landed her in jail for "corrupting the morals of youth" where she dined with the warden and his wife, and told reporters she only wore silk underwear. The press loved her and she got a lot of attention, but her next play which dealt frankly with homosexuality got tryouts in the provinces (Connecticut and New Jersey) but was kept off Broadway by the "Society for the Prevention of Vice" (an early morality group). Her next play The Pleasure Man, about the backstage shenanigans of vaudevillian Lothario featured an enormous cast of actors, acrobats, female impersonators and dancers -- all of whom were arrested on two of the three performances that took place. West and her cohorts were acquitted after the jury split their decision. One suspects it might have gone something like this wonderful scene from I'm No Angel:

See the full round up of overlooked books at Patti Abbott's blog.
Posted by K. A. Laity at 08:04

I'm a big fan of Mae West, but I hadn't known about these plays. I'll have to track them down. Thanks for the heads up!

I think there's a second collection, so you're bound to come across that as well. Enjoy!

I've known about the plays for decades, but haven't sought them out...hell, I haven't even seen MY LITTLE CHICKADEE yet. Shame!

Oh, you must! Sorry for the delay in responding: just back from Octocon, which I ought to write up if I get a moment tomorrow...

It is quite wonderful to see a focus on Mae West.
Come up sometime, honey . . . http://MaeWest.blogspot.com . . . come up sometime and I'll tell your fortune!