I suppose it comes as no surprise that I love the new Björk album, but wow! What a wonderful little package. The vision of it amazes me: the mash-up of science and myth that makes both magical. I will not rest until I've seen one of the shows. Currently she's playing in Iceland, but I will keep a weather eye out for news that she's heading my way.

A new Björk album (can we still use that word, album? Does it still convey the idea of a release even if it comes in digital form as well as tangible?) always offers a chance to see what the unpredictable Icelandic artist has in her brain pan lately. Her music delights and her ambitions grow.

Biophilia, however, isn't just an album. As her press releases explained, it's "a studio album, apps, a new website, custom-made musical instruments, live shows and educational workshops" as well as a documentary film about the whole process. The apps will give each song its own game, lyrics, animation and even academic essays on the science behind each of them, too.

She debuted Biophilia at the Manchester International Festival, stunning audiences with her wild costumes and fascinatingly complex instruments like the pendulum harps and a musical Tesla coil as well as a large Icelandic women's choir. Björk intends to spend three years touring with an elaborate stage show as well as an accompanying educational program, bringing music training to local schools. Doubtless this will be a welcome gift to schools who've made cuts in those essential programs...

Read the whole review over at BBHQ: I swoon quite shamelessly. Seems to be a thing with me lately. Bumping into things as well. Wonder what it could be. The lyrics for this  album are full of wonderfully quotable bon mots. I like the pull quote above because it reminds me of Beckett's "Fail again. Fail better," which is the sense of the song, too.

I'm off to London tonight. If I can manage it, I will try out the Android app for Blogger and sent a post or two while I'm on the road. Two Alan Moore performances! Don't curse me too much, Pádraig! Leaving behind picturesque Galway for the Big Smoke: it will be a change. 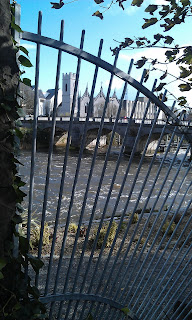