Tuesday's Overlooked A/V: Do Not Adjust Your Set 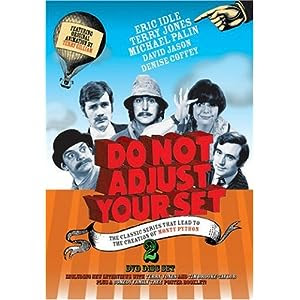 I'm looking forward to Holy Flying Circus tomorrow night, the documentary on the fight against the Python's Life of Brian. I know I've likely seen a lot of the footage already, but I'm sure it will be enjoyable nonetheless. Good example of how bonkers people can get over something they assume will offend them. At heart, Brian is a very moral film, which focuses on the all-too familiar foibles of human behaviour. Ah, but if you're reading this you likely already know that.

Something you might not know about is Do Not Adjust Your Set, one of the many training grounds for the future Pythons, like The Frost Report and At Last the 1948 Show (source of the original Four Yorkshiremen sketch). DNAYS featured Michael Palin and Terry Jones (who had also worked on The Complete and Utter History of Britain) as well as Eric Idle. This was a kids show, which is kind of stunning (although if you look at a lot of the mad kids show at the time, perhaps not quite so odd) so a lot of the humour is very nonsensical in the Goons/Spike Milligan/NOBA vein of absurdity. You can really see the connections between the Pythons and what came before them.

Of course one of the key reasons to see DNAYS is the Bonzo Dog Band. Why anyone thought they were safe for children, I don't know. The ginger geezer Vivian Stanshall and the delightfully daffy Neil Innes headed a rotating roster of musicians but those two were really the magnets. I've gone on at length about both of them, so if you don't know them yet, you should stop reading right now and just go look at the videos widely available at a certain tubish site.

A fave moment, appropriate for the season: the Bonzos sing "Monster Mash" for your delight.


As usual, find the whole roundup of overlooked a/v over at Sweet Freedom.

Yep, I loved it. And The Bonzos. My mother thought it was 'too daft to laugh at.'

I can't imagine seeing this as a kid. I would have so loved it. About the only surreal things around as a kid were Rocky and Bullwinkle which I adored of course. I was starved when I finally succumbed to the avalanche of Python, the Goons, the Goodies and of course the exquisite Peter Cook, all in my early teens -- and seemingly all at once. I was a goner from then on. Never been the same.

"Too daft to laugh at" is just too wonderful, by the way!

Or as my friend's daughter referred to SCRUBS, "I know it's clever and all, but it's RETARDED." She eventually succumbed.

You had to wait till your early teens for PYTHON, et al.? Well, I was only a little ahead, having first caught them on ABC's WIDE WORLD OF ENTERTAINMENT back in '73, before I was in double-digits, but didn't get the uncensored quill till the Eastern Edcuational Network (now APT) importation in '75 (so that I could overdose on Saturday night comedy...MT Moore, Bob Newhart, Carol Burnett, PYTHON, SNL...I was 11 by then).

I've not seen much of Scrubs and what I saw did not interest me at all. I think I did see some of the badly mangled bits of Python on the WWoE -- where I also saw bits of the Marty Feldman show, too, but it didn't sink in the way it did in my teens. As I child I was totally in the moment always and everything was part of the surreal landscape of my head, unconscious.