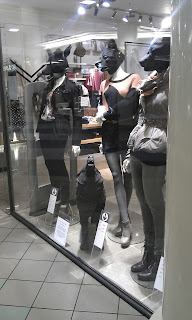 Yeah, I seem to have wolves on the brain of late. I'm not the only one as this window display in an Eyre Square shop shows. I can't explain -- oh, wait. Yes, I can. One reason is that I've got a story coming out soon: It's a Curse which will be the seventh installment in Paul D. Brazill's Drunk on the Moon series. If you haven't checked out Mr B's series, you are in for a treat. I had a lot of fun playing in his world with PI-turned-werewolf Roman Dalton. More as the time approaches, but I promise mayhem and humour in equal parts.

But on to the Forgotten:

I think that this is one of the books I gave away while jettisoning my library for the move to Ireland, which I probably regret (but surely I can get an ebook). It was the primary source for Hammer's Curse of the Werewolf with its cursed child born out of wedlock on Christmas day, his mother violated by a priest. The young child Bertrand discovers strange hungers as he grows up, dreaming that he has changed into a wolf (oops, the dreams are real) and his uncle finds it difficult to cover up the increasingly nasty shenanigans of his nephew. After an explosion of assault, incest and murder, Bertrand runs off to Paris. He tries to find ways to manage his affliction and joins the Guard to fight in the Franco-Prussian war. He falls in love with an innocent girl. They try to cope with his hungers by letting him drink her blood. But eventually Bertrand fears he will hurt Sophie and ventures once more out into the city to satisfy his dark desires, exposing his secret and resurrecting danger for them both. The rest of the story is suitably gothic and tragic against the historic backdrop of the Paris Commune.

This is a fine gem and one that horror and Gothic fans will enjoy. For more overlooked treasures, drop by Patti Abbott's blog for a full round-up.
Posted by K. A. Laity at 10:25

Can you enjoy western Ireland without a car? We have been thinking of a trip there (we've seen Dublin) but we hate driving on that side of the road. But is it hopeless to see it by bus and train?

Not at all; I don't have a car. But you can get around most anywhere with the buses. The trains are trickier because they all head to Dublin from various points. But there are lots of tours and you can take Bus Éireann just about anywhere if you want to travel independently.

I worked with a lad from Galway here in Bydgoszcz a couple of years ago. Name of David Ryan. Unusual name, that...

This is an unusually quick "dupe" as Jerry House just did this book, too...but, then, it is one of the less oft-cited classics, at least as perhaps the most popular of the surviving werewolf novels, among the claque of monsters grouped for us by Universal and Hammer in imitation, and by Aurora model kits...I haven't read much by Endore ("Men of Iron" and a few other bits), but I like the vampiric nod here with his arrangement with Sophie...

Yeah, sure, you like wolves. You don't have to live with 'em. They certainly smell worse than the books and the ghosts in the walls in the old place.

I'll check the phone book for Ryans, surely there can't be many...

Ah, didn't realise someone else did it recently. I have a head like a sieve. Along with general loopiness, the leisurely pace of my life is making me lazy.

Nope, I'm half-asleep, and while someone might've done it over the last two years, I managed to conflate Jerry's citation of Leroux's THE PHANTOM OF THE OPERA with the Endore! Sorry 'bout that.

They're still making phonebooks in the US, but it can't be long now...

Oh Kipper, I hear you've shacked up with an Irish Wolfhound, so you don't have much room to speak about big shaggy beasts, do you?

You watch out for those Irish hounds, too, now...

Heh, I think I am more likely to be dealing with Scottish wolfs at this time.