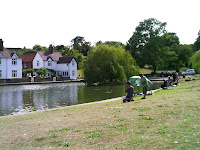 I will get to the Fall concert, but anon. Earlier in the day I had a fabulous lunch with Hannah Priest who ran the Werewolf Women Conference last fall and will be part of the Gender and Punishment Medieval Conference in January (which I'll probably go to since I'll be near by). We had a great chat about academia—and how to survive it successfully—publishing and her new murder-mystery company. Always glad to get to know other dynamic women :-) 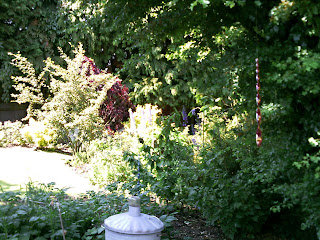 Saturday morning I caught the train to London, but once I got there, I hopped on the tube and headed out to Epping with the final destination Great Dunmow, land of bacon (at least since the Middle Ages). Jo and James took me for a ramble around the village. Last time I'd stayed with them it had been pouring so I only saw the view from a car. It's really a lovely place, although the drought has been so bad that there were huge cracks in ground at the cricket pitch and the river was just about down to a trickle.

It's an odd mix of quiet life and recent arrivals; the new local car dealership sells Rolls-Royces. It's Dick Turpin territory, too. Saturday night we went to a great old pub, The Three Horseshoes. The landlord was rumoured to have been an actor and you could certainly believe it. Small crowd, terrific atmosphere—the maypole was still up out in the back garden, too. 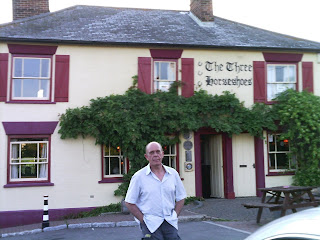 Some much-needed rain arrived overnight, so a relaxing morning reading the papers seemed in order. I had a nice chat with Jo's mum who had been evacuated to Ascot for six years during the war. She had been at a special school for kids at risk from tuberculosis because her father had died from it. We had a nice Sunday roast dinner and watched a couple of Ken Loach films, Looking for Eric and Route Irish: both great, both totally different. 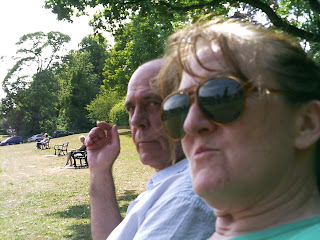 Rain again as I headed back to the Big Smoke. Village life is lovely, but I miss the dirty old town.
Posted by C. Margery Kempe at 04:31

London is smokier than Manchester?

They're actually both suffering from industrial revolution era reputations; both are quite pleasant and smoke free. But people will yet refer to London as the Big Smoke (especially Northerners talking about how things are down South).