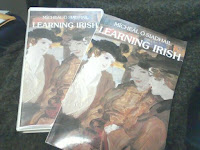 Yes, I've dug out my Learning Irish book and tapes (yes, tapes O_o) and will endeavour to master what I can.

I probably should have thought of it before, but thanks to Karen Hayes for asking on Facebook if I would share a description of the project I'll be working on in Galway (assuming all the massive paperwork and permissions and whatnot go through :-). Here's a little snippet, but if you want to read the whole thing, it's on Google Docs. The proposal begins with the pitch for the undergrad seminar for the fall:

Writers in Motion: Romanticism and Reality in Lives of 21st Century Writers

The "Writers in Motion" project aims to bring together popular portrayals of writers on film with the realities of being a writer in the 21st century. Films offer us a romantic view of writers' lives. Forget hard graft: according to movies, writers live, love and drink to excess, then occasionally transcribe their adventures in a brief montage. Success, naturally, ensues. We will spend some of our time interrogating romanticized representations of writers in a variety of modern films, while contrasting those portrayals with the realities of writers' lives both in the past and in the present. We will explore the benefits inherent in the complicated gap between reality and representation: why is Hollywood selling us this vision of the writer? Just as historians seek to recover past writers in the context of the social conditions of their time, de-mystifying the distorted perceptions fostered by Hollywood's commoditization of a romanticized past that obscures social realities, we will try to glimpse the realities beneath the representations modern writers confront.

Technology is changing the writer's life with the new surge in publication of ebooks and the instant access to writers and books provided by the internet. Writing was once a solitary profession, but now writers can collaborate and communicate with each other and with their readers. How are instantaneous communication and elastic textual formats changing the ways we write and read? What does it mean to be a writer in the 21st century? Will the traditional print hierarchy and genre structure dissolve or will new categories develop? Are traditional publishers still necessary? The recent end-run around publishers by the Wylie Agency, when super agent Andrew Wylie sold his clients' ebook rights directly to Amazon's Kindle store, has inflamed already tense relations between traditional print publishers and ebook sellers—not to mention authors, agents and readers.

What new categories are emerging that may supersede the traditional forms of publishing? How should writers approach these new opportunities? With greater access afforded to publication by the web, does this model, made possible by new and revolutionary technologies, lead to more democratic forms of producing and disseminating ideas and knowledge? Or does it reinforce and exacerbate existing hierarchies among writers and the value of what they produce? Does equal access to publication in digital media enhance the range of alternative ideas and democratize knowledge by expanding access to readers hitherto excluded? Or does it further reduce its value by flooding cyberspace with reams of otherwise unpublishable dreck? [continued...]

And the job description: Teach one undergraduate seminar to a maximum of fifteen students in digital humanities in the fall semester, for two hours per week for eleven weeks. Advise fifteen to twenty graduate students and liaise and cooperate with faculty in related fields for a maximum of 15 hours. Collaborate with the Moore Institute for Research in the Humanities and Social Studies and its key academic staff on the following key research activities: 1) Texts, Contexts, Cultures 2) TEXTE: Transfer of Expertise in Technologies of Editing, 3) Thomas Moore Hypermedia Archive.
Posted by C. Margery Kempe at 09:05

Sounds pretty engaging...how necessary is Gaelic to daily life in Ireland at this point?

"I say learn one language and stick with it. As many of our fine fundies haven noted, If it was good enough for Jesus--!"

Naw, I need a round dozen of them. Yep. Then I can sing along in the pubs when someone starts with "Na Buachailli Alainn."