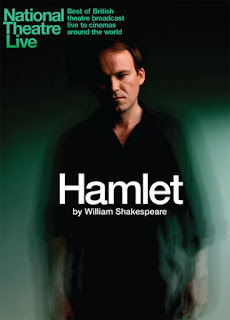 I am eternally grateful for the NT Live broadcasts; they bring a little bit of the London theatre experience to the (currently) frozen north, which seems so far from the city of my heart. Thank you, Spectrum 8 for hosting the broadcasts, even if Monday night's show seemed to have its share of technical difficulties, including some on-screen monkeying with the display. Hard not to call out, "No, not resolution! position!"

I'd heard great things about this production of Hamlet from the start. I'd seen Rory Kinnear in other productions at the NT and had been impressed with him, but hadn't really thought of him as a Hamlet. He fits perfectly into Hytner's vision of Denmark as police state where everyone's under constant surveillance. Hamlet, far from being a pampered prince, seems to be a confused young man mourning a father he admired and idealised. Patrick Malahide plays his uncle/stepfather as a cold and calculating bureaucrat; Clare Higgins plays his mother as a weak woman with a drink always to hand. When Hamlet speaks of how her first husband cossetted her, we see that weakness and a fear of being alone. I loved how Polonius (David Calder) is not the buffoon he's usually played to be: there's something almost chilling about him, though sometimes he pauses as if realising all at once what he's doing to his own children. His cruelty to Ophelia in particular is sharp here.

Ruth Negga, who was so lovely as Aricia in Phèdre, plays Ophelia with affecting vulnerability, goofing with her brother while their father reels off his advice, then naïvely meeting with Hamlet and guiltily giving the game away (the bible she reads has a hidden mic inside). When mad, she pushes a shopping cart across the stage like a street person though tracked yet by two of her father's staff. In an exquisitely chilling moment, Hytner has her pushed out the door by the security guys. She's become too embarrassing, so she gets bumped off.

David Calder doubles as the gravedigger, a good choice to show him as affable as Polonius was creepy. James Laurensen doubles as the Ghost and the Player King, also a nice pairing. Giles Terera's Horatio didn't seem to be quite the confidante the character normally is, though his regard for Hamlet came across clearly. The atmosphere of paranoia affects all the relationships, which gives a new reading to the dialogue -- which is everything you hope for with Shakespeare. It helped bring out the machinations of Fortinbras better as well, which is seldom done well.

But Kinnear really was a wonder. The first few lines, his delivery seemed almost too clipped and arch, but it worked. In the first speech he's conveying his anger and betrayal. Throughout Kinnear presents the lines as if they were thoughts arising from his head, not "speeches" written down. It's hard: even people who've never seen a Shakespeare play know "To be, or not to be." I get impatient with actorly excesses: Kinnear gave an utterly natural performance -- especially so when Hamlet is conscious of performing as he puts that "antic disposition" on and overplays. Hamlet is trying to figure out what's real and what's not, and like so many people, sometimes it's the loss of things that makes him realise what matters most. It's a wonderful process of discovery in this production.

The only real disappointment -- it's a stellar cast, the sets wonderful, everything really moved along despite the three and a half hour length -- was Patrick Malahide. At times it looked like he might have been reading off a prompter as he stared too fixedly in the same direction. I know he can be fantastic. I saw him with Jeremy Irons in Embers, where he spends most of the play listening to Irons' character, yet he seemed every bit as present as Irons. Maybe it was an off night. I loved this. I wish I could see it again. Maybe they'll put it out on DVD. I hope so.

I first ran across the idea of Hamlet pretending to be on the edge of madness in "Asimov's Guide to Shakespeare". Although I don't remember if it was A.'s idea or not, I do remember the chilling thought of the heir, Hamlet, having to pretend to madness so as not to be killed ( I guess it was bad luck to kill a fool, or perhaps a fool could not become the king). Anyway, if one is to survive in future America as a dissident, one may have to play the fool...I really like this play, only perhaps it is too long : D

Hey, Lou -- thanks for commenting. I guess I always have the Danish original in my mind, so I think of Hamlet certainly faking his madness (at least initially).

I forgot I was going to mention that the whole time I also had in my head the theory that Nabokov gives to one of the characters in Bend Sinister that the ghost is actually the ghost of Old Norway impersonating Old Hamlet, as he and Fortinbras have a plan to undermine the Danish court from within. It's kind of brilliant and paranoid, which completely fits Hytner's version of the play.

I should add a link for those unfamiliar with Saxo Grammaticus.

Yep, with both hands...so as better not to blot any lines, doncha know. My first blatant example was Don Juan Manuel's rather comprehensive 14th CE century blueprint for TAMING.

References to Billy the Shake's tendency to rewrite his favorite stories into the plays we all know to some extent or another. I'll have to track down the original source of the "Never blotting a line" bit of business.

It was unclear to me what you meant. Shakespeare's use of sources like Ovid is well known. I always emphasize to students that Shakespeare is not "original" in the sense that they want to believe, that his plays are all "remakes" of existing stories. Though there's no evidence that he was familiar with Saxo's version of the Hamlet story, he was certainly very familiar with Belleforest's.

Check out The Spectator's review of the play which offers some good insights.