Friday's Forgotten Films: What a Carve Up! 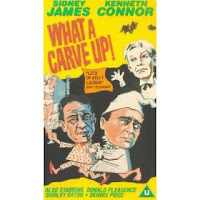 Bending the rules a bit (do you expect any less from me?), I offer not a neglected tome but an overlooked bit of celluloid. In my defence, I just learned about it last night -- thanks to the lovely Caroline Gold -- and watched it right then thanks to YouTube. The film was not only inspired by a book but also inspired a further book. I suppose that makes it sound rather more literary than it is. I had thought it was going to something like Carry On Screaming! (yes, everything has exclamation marks today) but it's more like the Abbot & Costello horror movies but not so goofy. Funny though! Besides, I'm a sucker for Sid James thanks to Tony Hancock.

WHAT A CARVE UP!
AKA No Place like Homicide!
Dir. Pat Jackson
Based on Frank King's novel The Ghoul
Writers: Ray Cooney and Tony Hilton

Connor's Ernie, a timid copy editor (very Dudley-esque), receives a visit from creepy lawyer Sloane, played effectively without too much showboating from Pleasence. His uncle has died so he must head up to Yorkshire for the reading of the will with his much sharper pal, Sid. Cue bad Northern accents and "primitive" conditions (for those unfamiliar with it, the north of England tends to be portrayed like the southern States -- and about as accurately). Ernie's meeting his relatives for the first time and finds they're mostly all mad. Then the murders begin.

There are some good spooky moments and some good-hearted humor. Price and Gough are brilliant of course, Esma Cannon really shines as the dotty auntie who's a little unstuck in time, promising to introduce her "literary" nephew to this Shaw fellow who ought to be helpful. There are the usual old dark house elements and surely most of the plot will be predictable to a 21st century audience, but nonetheless amusing. There's even a surprise cameo at the end that will please early rock-n-roll fans.

So, if you've got some time on your hands and enjoy mild horror and classic humor, make the most of YouTube or pick up the DVD (region 2 only).

I'd listen to it now, as I wind up my workweek, but suspect that would be to do it a disservice (HOUSE works pretty well as radio, 30 ROCK too). And, hey, there's three more PIONEERS OF TELEVISION episodes to review...though I can't imagine they did as badly with the crime drama, westerns and local kids' show as they did with sf...

If we do a "Forgotten" Film, weekly? Tuesdays? Game?

Oh yeah, a lot of the humor is physical or visual, and the exchanges between Sid and Connor are priceless.

Hmmm,I could aim for Tuesdays, though I may have to alternate with Jane Quiet posts which I've been delegating to Tuesdays (and already forgetting this week, sigh). So remind me, eh?

These postings of new-to-me books, authors and/or films always have me scurrying to do some research. Frank King (pen name of Clive Conrad) was a founding member of the CWA and a prolific author, writing three books a year. Oddly enough, "The Ghoul" (on which this movie is based) was only his second book. The first movie based on it was made in 1933 starring Boris Karloff, although the two movie synopses sound totally different.

Oh, wow! That's great to know. I knew it was the same book as the Karloff film, but I didn't know anything about the author. I'll have to see if I can get the book from the library. Should be fun. Thanks!